It has been five days since I got on my Fuji Silhouette bicycle and rode it.  So this evening as I finally worked up the guts to do just that and was mulling over a title for this blog, I thought of the words, “Shut Up, Legs!” This is the catchphrase of Jens Voigt, who rode the Tour de France 17 times, a record only beaten this year by Sylvain Chavanel.  He retired in 2014 the day after his 43rd birthday and setting a new one-hour bike record — the farthest anyone had ridden a bike in one hour.  You can see my ride today on Strava here.

While I’m slowly getting back to riding (I hope) and watching the Tour, Jens has been commentating on it for NBC Sports Network.  As mentioned in my previous post, about the Tour de France, Top 5 Reasons I Love Watching Le Tour de France and You Should, Too.  You should go read my post and then come back.  It’s really good!  I’ll wait here.  Done?  Great.  Let’s continue.

Overcoming Injury Is a Mental and Physical Endeavor

Anyway, Jensie, as he’s known, is quite a colorful character.  He was a crazy strong bike racer, always going on these crazy long attacks in the mountain.  Voigt was never caught doping and says he never did it.  He has another shirt that says “It’s Only Pain.” 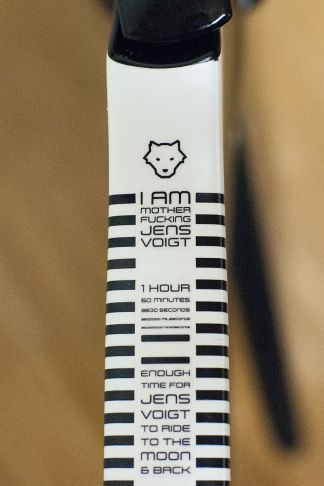 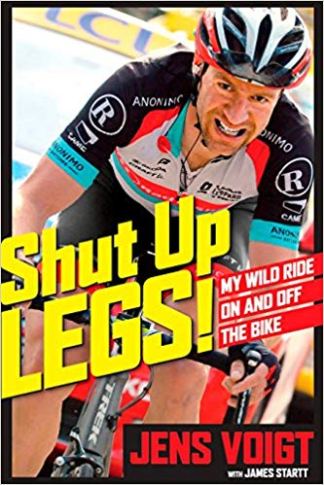 The “no pain, no gain” mindset is balderdash in my opinion.  But there is something to a little bit of mind over matter, and working with pain rather than let it overwhelm you, if you can.  A medical practitioner I’m working with doesn’t want me to overdo it, and she happens to ride a bike too.  So she understands the very nature of cycling involves some discomfort.  And while strengthening is part of the game, so is adapting yoga poses that might aggravate the injury, and maybe not doing hills or going as hard as I did on the bike pre-injury.  She says I won’t do any permanent damage, but without an MRI…  Which they don’t do anymore most of the time because everyone has issues.

So exactly where is that line between healthy exertion and prolonging the damage?  That’s a hard one, because pain is so subjective.  And without exerting, there are fewer benefits.  I will just have to keep tuning into the old bod and try to hear what it’s telling me.  (Besides, while resting, please pass the bon bons.  By the way, anybody know what a bon bon is?  I don’t’ think I’ve ever seen one in real life.)  But tuning into the emotions and ego are also important.  Am I overdoing it to meet some arbitary mileage goal?  Or am I doing the right amount of effort for ME — at the particular time I’m doing it?  Gentle self-care, or coaching yourself with compassion, as I wrote a few posts back, is also key to surviving for the long haul.  Hopefully I can and will do both.  We shall see.

But back to Voigt:  he even has his own bike ride named after him, and he also wrote a book based on his catchphrase:  “Shut up, Legs! My Wild Ride On and Off the Bike.”  So now you know the reason for this post’s title:  it’s about me getting back on the bike and making sure those legs still can pump up the jams, I mean crank out the tunes, no, go for a spin.  Oh, and you can get Jensie’s book (I hope to review it here for you at some point) and also buy his cycling apparel and t-shirts, hoodies and sweater all at www.shutuplegs.com.  I don’t get a handsome bonus for mentioning this, but if you’re reading this Jens, please send me those big Deutsch marks or Euro dollars tout suite!

The man suspected of shooting to death a Houston cardiologist last month while both were riding bicycles has killed himself. Apparently the shooter, a former law enforcement official, held a 20-year grudge against Dr. Mark Hausknecht.  That’s because of an operation the doctor performed on his mother, who died on the operating table.  I won’t go into it further since the Houston Chronicle ran a very detailed article by Keri Blakinger and Fernando Alfonso III, “Suspect in Houston doctor’s slaying kills self during confrontation with HPD.”  But Houston Police Department Chief Art Acevedo is right that it was a sad day but it could have been worse.

Instead of showing you the face of the shooter, here’s a nice BIG salad I made the other day.  Well, this was 500 words until I started trying to make this make more sense.  Come back Monday for the next installment of A Dude Abikes!