This sad news came across my screen, and I just sat and stared at it. She was 28 years old, hit by a car Thursday night. Now, gone. The details are scant and will trickle in. Here’s an updated story from the NBC affiliate, KXAN: “Cyclists push for change after fatal MLK Blvd crash.” The story says she wasn’t wearing a helmet and the car driver stayed on the scene. Despite this tragedy, riding a bike in Austin is still very safe compared to driving and walking. That won’t help Jessica, but maybe it will help others of us who do still bike.

END_OF_DOCUMENT_TOKEN_TO_BE_REPLACED 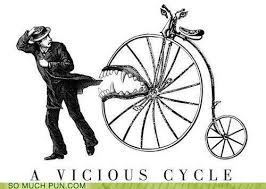 For those living under a rock, or in the southern Arabian peninsula — under Iraq (ha ha ha!) — the pun is a form of humor that dates back to Egyptian hieroglyphics. If English is not your first language, or you have an impaired sense of humor, let me explain the title of this post. You see, cranks are what connect the pedal to the bike. And because riding a bike is good for one’s mood, being cranky is both ironic and a pun about that. Because if I can’t use my bicycle, I become grumpy. Having to explain a joke is a sure sign it’s not that funny. However, it’s still a pun. But if you got a chuckle or not, keep reading. (You can read my previous attempt at bike humor called A Bicyclist Rides Into a Bar: Some Bike Jokes I Wrote Just for You.)

END_OF_DOCUMENT_TOKEN_TO_BE_REPLACED

This is not a scientific post. I’m not dropping any science on you. It’s a topic of interest to A Dude and probably to many. Tonight on the way home from an errand, I ran into another bicyclist (he’s OK). Turns out he’s a student at the University of Texas. He was a super nice guy who had just come from a soccer game and wasn’t wearing a bike helmet. He was stopped at the sign near where Anthony Diaz was killed by a bus driver, and I asked him what happened to the ghost bike. He didn’t know, but guessed it was an upcoming marathon.

That mystery unsolved, the conversation shifted to him talking about his work in kinesiology. Which if you don’t know is the study of kinesi (whatever the heck that is). But seriously, he works on measuring oxygen in the blood, studies how horrible sitting is for your metabolism, what is more efficient for muscle-building, and so on. I learned some stuff in layperson’s terms since I frequently am fighting gravity and aging and other sciencey things. I figured I’d share with all 12 of you who might actually read this. Because he’s getting a master’s Degree… in SCIENCE, he actually blinded me with …. SCIENCE! Or maybe that was his bike light, I’m not sure.

END_OF_DOCUMENT_TOKEN_TO_BE_REPLACED

Update: The bus driver who apparently murdered Anthony John Diaz was arrested for manslaughter. The woman was fired from Capital Metro and will have to answer for taking four prescription drugs that had side effects of drowsiness. Let’s hope there is some justice. For more about this developing story, see this Austin American-Statesman article. You can read my two posts about him here: First Austin Bicyclist Death of 2019 – Anthony John Diaz and also here: Ride of Silence to Ghost Bike for Anthony John Diaz – Presente!. For more, and cheerier, Austin cycling news, keep on reading!

END_OF_DOCUMENT_TOKEN_TO_BE_REPLACED

It’s happened to most people who exercise at some point. It’s time to go to the gym/yoga/karate/spin class or for a walk-run-swim-bike ride, and you’re just not feeling it. Maybe you didn’t sleep enough, you had a stressful day at work, forgot to eat enough or well, or all of the above. There could be a plethora of valid reasons to take it easy and park your butt on the couch. And some days, that’s exactly what you need (see my posts Rainy Day Blahg: The Value of Sleep and Rest Days for Cyclists and The Rest of the Story About Rest Days for Cyclists).

But when your tiredness is mental and you still have some gas in the tank, you should go for it. Getting yourself moving may feel like climbing Mount Everest, but it is doable. And you won’t even need crampons. Because those pointy shoe things look dangerous and probably give you cramps. Come on inside this post to find out how I make myself bike, walk and do yoga even when it’s the last thing I want to do. And Happy Spring Equinox and Super Moon, y’all!

END_OF_DOCUMENT_TOKEN_TO_BE_REPLACED

The smorgasbord of music, movies, workshops and more is finally over. I’m relieved and still recovering, but I’ll also miss the creative energy. I won’t miss the lines, craziness on 6th street, scooters everywhere and long days trying to see as much as I could. There was a Day 10 but it was mostly for gaming (though I did attend the softball game and barbecue). In this post I’ll do mini-reviews of the remaining three films I caught and share my thoughts about what it all means.

END_OF_DOCUMENT_TOKEN_TO_BE_REPLACED

I’m sitting in the Elephant Room in downtown Austin, Texas at 10:45 on a Friday night, the second Friday of the huge conference and festivals, SXSW. It’s an underground jazz club — literally — it’s in the basement and named for the prehistoric mastodon fosssil in the stone wall. It’s in between the 40′ acts. Graham Reynolds and Golden Hornet just played his own compositions, a rock / jazz / classical hybrid with trombone, violin, standup bass, drums and him on keys. The cat can play. While people talk and drink, come and go, I decided to post this blog, or at least the beginnings of one.