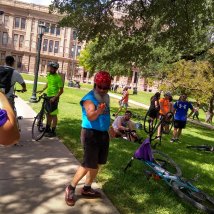 Saturday I got myself down to Bicycle Sport Shop on South Lamar for Bike Austin’s 9th Annual Hottest Day of the Year Ride.  About 40 folks from a young age to not so young arrived to sample the mocktails, peruse Bike Austin t-shirts and brave the heat.  The good part was that the route was a short 10-miles and took us to two splash pads and two pools.  While technically not the hottest day, it was warm enough, 99 F heat index.  A Dude was serving as one of the ride leaders, and it was an eventful afternoon.  The next night I put in the first longer ride in a while, 31 miles total.  So let’s check them out.

Katie, the executive director of Bike Austin, got us ready with a safety briefing, and previous director Tom, talked about the history of the ride and the ways to stay cool.  Seek shade, pre-hydrate, go to splash pads and pools, and rest often. Read my related post, Surviving the Summer Heat on a Bicycle.

Here’s the Strava map and entry:

Fun event, started with about 40 riders of all levels. Played sweeper and quickly was called into action: some had to drop off, then a number of mechanicals so I loaned or used my pump or gave moral support. One rider had partied too hard and threw up… Alot. Gave her a Nuun tab and watched her for dehydration but she was ok. Good route by Katie, BA ED, kept busy road riding to a minimum, some nice stops like Larry Monroe bridge. The pool and splash pad stops were really nice and the second pool was needed by me for sure, even though some clowns – strike that, clouds – came out and it rained a tiny bit. The high was *only* 97° while the real feel and road temps were over 100°. Also got some nice elevation in a short time. Just some good folks out for a safe group ride on a warm day. Saw a few usual suspects too. No one crashed so it was a good day. Everyone should join and become a member of www.BikeAustin.org – Today!

All in all it was a good day.  I really enjoyed the opportunity to help others, since I always appreciated that when I was starting out (and still do).  By the end of the three hours I hadn’t met everyone, and many people dropped off to head their own way.  But I felt happy being part of a peloton, even a slow-moving one, because, well, it’s just cool.

A pack of bikes turns heads of cars and people walking, and we did our best to not impede traffic by riding single file.  If there were any incidents of road rage, I didn’t see them.  The point was to show that riding in the heat is possible with some smart preparation.  And maybe going to a concert and drinking copious amounts of adult beverages (like one of my customers mentioned above) isn’t a great idea.  It was a great event.

After feeling puny and poorly most of the day, I figured some exercise might be just what the doctor ordered.  With new lights from Vision Zero on my helmet for extra visibility, I headed out to my frequent stomping on the pedals grounds, the Southern Walnut Creek Trail.  I felt pretty well and just focused on keeping a steady, comfortable case while also activating my core muscles, such as they are.  The speed I was doing was pretty high for me, averaging around 15 mph, but I faded as the ride progressed, so it came down a bit.  But I was happy to say the legs felt good and I didn’t have too much pain.

I’m including in the 31 the miles that are missing I’ll add manually because I forgot to hit start on my Garmin watch. A nice ride considering we got a little rain to cool things off sllghtly. Longest ride in several weeks and not too bad in the pain department. That’s encouraging but I’m not out of the woods yet.

After Thursday’s ride, which I talked about in Speak Up, Legs! Slowly Easing Back Into Bicycling & Houston Bike Shooter Update, I had a pretty good three days on the bike, culminating in a 53-mile week.  This is another one, and I went to the store for 5 miles.

Please check back Wednesday for the next A Dude Abikes! 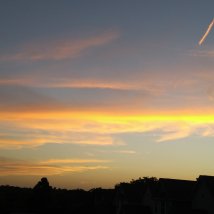