Back on February 27, 2017, I had the good fortune to collect a fantastic prize, The Fairdale Weekender Archer: A Review of My New Bicycle I Won in a Raffle!  After a year, I decided to not ride the Fairdale until I Just Passed 10,000 Miles Riding My Fuji Bicycle in 2.5 Years. That’s Awesome! about a month ago.  On June 25, I had An Imagined Chat With My Fairdale Weekender Archer Bicycle.  And as of September 1, I’m happy to announce that I have begun riding Sophie the Sea Foam Fairdale again.  So here is a post about that.

The main thing to know is that I still really enjoy the smooth ride.  Like buttah!  It was an adjustment however, due to single ring front with nine speeds on the back, wider handlebars, and heavier 28-pound weight, due to the chromoly steel.  Sophie also has disc brakes and a different seat.

Although she tops out at a slower speed because I just run out of gears, the cassette has a wider spread, so it feels like more than just the nine.  All this required my fathlete body to work a little harder since it was in a different position, meaning that I’m sore.  But that’s OK, because I remembered how.  In fact, it’s exactly like riding a bike.

The first ride was on Saturday evening, just around to test her out.  It was a mere 20 miles, but an enjoyable loop up to Shoal Creek.  I made a stop at Sun & Ski Sports where young biking, running, photography and more phenom Lil’ P happened to be picking up a part and fortunately Mike in the Bike Shop was working late.   Although it was good buddy Trent who installed the clips on my shoes.  Below is a map and the stats from my ride in Strava.

Aside from seeing your mates, one of the nice things about having a regular bike shop (and S & S is one of three that A Dude frequents) is that it’s a little bit like going to the candy shop.  Sure, it takes money to buy stuff, and I have very little of the green rectangular papers these days.  But it’s fun to look.

They also know I’ll be back to buy more stuff when I must (like Chamois Butt’r and Continental innertubes), or Gatorskin tires, a rear view mirror, or more when I can.   Since I had previously purchased the clips for a set of new shoes, they were happy to install them.  Of course after a while the guys kind of also don’t object if you bring them a fermented beverage, or six.  The good stuff too, none of that Lone Star or Corona or Budweiser stuff (sorry, North American mass-produced, watered-down beers!).  If only I would hear the ka-ching! of cash money flowing into my pockets with every product mention.  Sigh.

Sunday night, I was joined by Jenni, a great rider I met on one of the training rides for the 1400miles.com “Don’t Fear the Finger” a couple of summers ago.  Along with her other half, we’ve met a few times and stayed in touch.  I’ve been watching her rides on Strava, and she’s no slouch.

So when it turned out her partner was recently confined to doing indoor training for the most part, I suggested we do a ride.  But it would have to take into account the fact that I’m more of a fathlete, and well, she’s not.  She’s slight of weight but an awesome and very strong rider, so she kicked my butt all up and down the roads.  I was also privileged to be with her when her total mileage for the year passed 4,000 miles on this ride.  That’s my goal for the year, and she’s already hit that with four months to go.  I told you she was awesome!

Fortunately, I was setting the route as we went, and especially as it got dark on streets that she was not famililar with (yes, I know that’s a dangling preposition), we had to go at a safe tempo.  But it was really fun to ride with her, and we had some nice moments chatting, when I wasn’t sucking air into my lungs or we were single file in the bike lane with cars screaming past.

It was cool that when she got a flat, I noticed a passing car had bike racks; I flagged him down and he had an extra C02 cartridge.  (Thanks, anonymous John!)   Also, having her there did encourage me to go a bit faster than my usual tempo, and going faster is fun.  After 25 miles, she headed back home, and to match that, I went out for another 12.  At that point I was tiring a bit and brought my average speed down.  But it didn’t matter because it was a joyride, after all, and 37 miles was still a nice contibution to my mileage goal.  In fact, I had a 125-mile week, thank you very much!

On Saturday, I also debuted a pair of Brooks Dyad running shoes.  They were purchased last year back when I had a job.  But due to injury I didn’t see myself running.  Then a Strava friend and great rider named Dena encouraged me to just start doing faster walks.  So that’s what I did.  I biked to the nearby high school running track, and did 8 laps in 32 minutes, clocking 2 miles.  Normally I get in about 1.3 in 30 minutes.

I probably won’t do the fast walking every day.  Today I was tired and sore from riding Sophie and also from the aforementioned ass-kicking Jenni gave me.  I have picked up a little shin splint injury and an old foot thing is bothering me.   So it’s even more important that I change shoes around and replace them.   I don’t want to wear them on rainy days, yet, and today we finally got some, so it’s cooled down to the low 90’s, yay!  (That’s considered a cold front in Central Texas.) 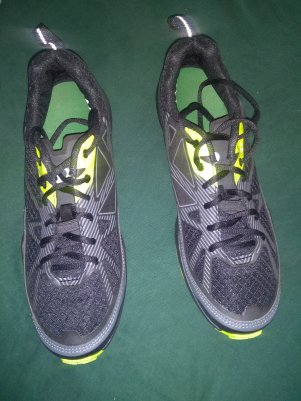 The ride with Jenni (and Sophie) was also the debut of my new Pearl Izumi mountain bike clip shoes.   I actually bought them quite a while ago when they were on sale, but was being frugal and trying to get as much use out of them as possible.  They worked great and will definitely help reduce some feet soreness.  They also have some nice safety features:  yellow highlights (which match my helmet) and reflective tabs on the back.

Since since I’m walking every day (about 45 miles per month just on walks) and biking most days (250-400 miles per month),  I put alot of wear on my shoes.  So it was well past time to re-shoe, and I’m glad I finally did for some good walks and a great ride.

Well, that’s all for now.  Come back Wednesday and Friday for more!

One thought on “The Return of Sophie the Sea Foam Fairdale Bicycle!”