Alternate Your Training to Recover and Avoid Burnout

After 2016’s average 100 miles per week of cycling (see 5,306 Miles in 2016: A Dude Abikes’ Year of Bicycling Vigorously), I received some very good advice from bad-ass bicyclist buddy Bryce who rode over 6,000 miles last year, helped A Dude out on part of an 80-mile ride New Year’s Eve of 2016 — while he was sick! — as well has contributed to a number of my charity rides, is activity with Please Be Kind to Cyclists, and organizes their annual Ride of Silence honoring cyclists killed by cars. I don’t remember the exact words, but they were something like:

“Take some time off the bike. If you don’t really miss it, maybe do some other things. If you do, then get back on.”

Sage words indeed. I did that last year, but not this one. Thanks to my depleted iron stores, I’ve been forced to slow down now. Exercise-induced anemia is a real thing, as this scientific extract from the British Journal of General Practice shows. Apparently my “Epic Velocimania” (4,714 miles in 2017) wore me out more than I knew. The week of severe restriction to fruit, nuts and seeds did not help A Dude’s energy.

So today I was planning to bike over to Avenue Five Institute on Burnet Road for a donated massage administered by lovely Lexi and arranged by cool Collette; I approached her last fall regarding my Mamma Jamma breast cancer fundraising ride (65 miles ridden, $1,518 raised). But the wind was whipping up to over 30 miles per hour gusts and the temperature dropped from 70 F to 44 F. A Dude is dedicated and could have done it but called an audible and wisely caught a ride from a work search colleague, the smart Shannon, head of Leap to Success. When it was done, feeling relaxed and invigorated, I hoofed it 2 miles to the bus according to my Strava report below. Walking in cold and high winds is restful compared to a long bike ride, but I find it’s good to keep moving and use my body differently. When I do get back on the bike, my legs a refresher, along with my attitude. 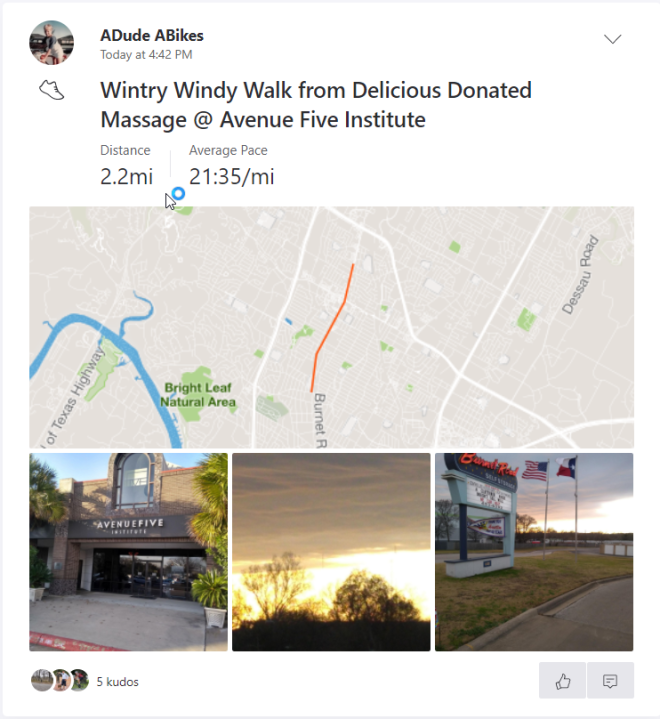 Ironing Out the Details of My Revised Eating Regimen

I noticed I omitted food pictures yesterday by accident, so here’s one for today. Raisins are high in iron. For any readers abroad, we call this crazy-good concoction of celery, peanut butter and raisins “Ants on a Log,” Worth a try and easily change the peanuts for cream cheese, vegan cream cheese, almond or another nut butter, or what have you. Sprinkle with cinnamon or other spice and even honey or vegan sweetener for more flavor. Otherwise, I’m looking into spinach, fortified almond milk, baker’s yeast, dried apricots and yes, dark chocolate as vegetarian sources, on top of beef, chicken and organ meats.

While not my favorites, the iron within the latter foods is more easily absorbed by the human body, according to the “evidence-based nutrition at Authority Nutrition.” If you’ve over-trained and are feeling any of the symptoms like brain fog, fatigue that does not abate much with sleep, lack of coordination and so on, consider being tested for iron levels and adding these foods into your diet if approved by your doctor. Disclaimer note: A Dude is not a doctor and is not qualified to give anyone advice about medicine or really anything. Except bicycling, I kinda know some stuff. Although I don’t have a license for that either. (Here’s an article explaining why bike licensing laws seldom work.) Anyway, in addition to the supplement, diet and goal of fewer miles, I hope to recover, be re-tested and ready to ride more by spring, if not sooner. But Mother Nature rules. Don’t fight her. She always win. Always!

It goes without saying that baths especially with Epsom salts and massage feel exceptionally good after intense exercise. The former brings magnesium into the muscles and massage flushes out toxins, kinks and soreness. Most everyone knows the latter at least but I’m always astonished by cyclists who have never even had a massage. You are missing out if you don’t regularly implement both of these practices.

The pros sure as shoot get massage after every race, because they are putting out supreme effort that results in lactic acid build-up in the muscles. The best way to get rid of it is massage once a month or more if possible, depending on your levels of activity and soreness. Products like Sports Legs and pickle juice help. Other benefits are that it:

Unless you are living in a remote igloo in Greenland, are in solitary confinement or like Howie Mandel have a condition where you don’t like people touching you, I can tell you from experience that you are missing out. If you’re a fellow cyclist, walker, runner, swimmer or other athlete; desk worker, factory or other manual laborer; or just a person with some muscles, then please get thee to your nearest massage clinic — stat! Schools operate them with student interns so while you won’t get the best professional quality massage in the universe, you will get a good deal. So if budget is a concern like it is for jobless me, check one out. Short of that, there is self-torture with a firm roll of foam, aka foam rolling, but they say it gets better with repetition. We’ll see about that.

Once again I’m over the word count and time limit, so that’ll do, A Dude, that’ll do.