“The goal of practice is always to keep our beginner’s mind.”

A Dude Abikes began this blog in 2016 as an experiment in writing about his biking. For the first two years, he focused mostly on all the biking, not so much on the smithing of the words. As 2018 unfolds, he has resolved to write daily for a month and then regularly after that. It’s clear there is still quite alot to be learned about the art, craft, science and je ne sais quois about web logs.

For example: Ads, which sound like a good idea, don’t pay until you have a ton of followers. You don’t have followers without good content, but also key words, catchy headlines, good graphics and layout, a target audience you tailor the content to, and much more. There’s the promotion, engagement, visibility, search engine optimization (SEO) and so on. There’s the issue of a setting up an email with the new domain name in order to invite subscribers to join a list which I can then use for further engagement with the audience. Etc. And I’ve barely scratched the surface. (Doesn’t scratching underneath the surface sounds hard, and gross? Nevermind.)

When You Don’t Know Stuff, Politely Ask for Advice

People love to give advice. So I asked, and am grateful to Marc Miller at Career Pivot. He graciously provided with me an hour of coaching about this brave new world of words that are, uh, like, totally new and, ya’ know, brave. (Sorry, I just had a Valley Girl moment.) I expected a lecture on how to get a job, but although he did give me a reality check. Others have been encouraging, but when a successful blogger says I should go for it and keep doing this, that’s helpful. He thinks I should focus on writing my book. I do too, if I can keep the wolves at bay with either subscribers, other devices like coaching people new to biking, some generous benefactors (maybe you?) or temp jobs. It’s the gig economy now.

“In the beginner’s mind there are many possibilities, but in the expert’s there are few.”

One of Marc’s pro tips pointed me to the ProBlogger website led by Australian Darren Rowse, and now I’ve signed up for one of his programs. He has a ton of experience blogging and one could spend days and still not get through even a portion of his extensive library. Another tip which is from Darren is to have an avatar of your ideal audience member. I also looked into a local MeetUp for WordPress bloggers, but because it’s a three-hour round trip bike ride, I may have to search a little closer to home. Learning more about writing will take time as well, and I’m considering avenues for that like Texas Writers League, finding a mentor, joining a group of fellow writers, and so on. So it’s kind of overwhelming, exciting, nerve-wracking and awesome.

What’s Up With Another Buddha Reference, Dude?

“Comparison is the death of joy,” said the Buddha. You put out your best effort and hope it will be enough. The only person you should really be racing or measuring your progress against is… You! A Dude will keep calm and blog on. To quote Cole Porter, “You do that voodoo that you do so well.’ Meanwhile, Namaste, Dear Reader. 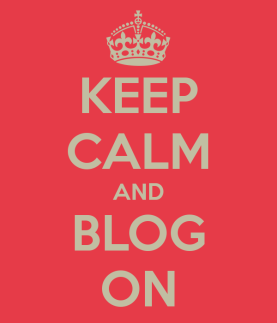