I’ve written about One Page Salon before, where local authors read from a work in progress.  But after missing one or two in recent months, I biked downtown to be sure I attended tonight.  Once again rewarded by being inspired by fellow writers, having interesting conversations with musicians and other creative people, and in general enjoyed being part of a community of like-minded folks.  Sure, I could write about the election again, but you can read about that elsewhere.  So I’m going to write about writing, and since I rode my bike there, it’s relevant.  Protocol be damned!

Everyone Has a Story, and It Should Be Told

These were the words of one of the readers, Cervantes de Landazuri, when he was asked one the customary three questions by host Owen Egerton.  Many people never will write down their story, but nowadays plenty of people are recording their lives via social media in one way or another.  And while it has its downside, we are as dear old college friend used to say, we need to “talk story.”  She was Polynesian, and like in many cultures, the tradition of passing on information was oral, or through song and dance.  Blogging is just a modern-day variant of that.  Memoirs like my book-in-progress covering two years of biking (my “epic velocimania”), has been around a while, too.

By the way, Cervantes kindly gave me his book.  The Balcony and Other Essays is a small collection of short stories, but it’s a book that he wrote and published through Create Space and is for sale on Amazon.  I look forward to reading it, especially since he gave it to me and signed it with the phrase, “Next time you’ll be giving me your autograph, deal?”  He had a coupla beverages so may be a little confused that my book will not be ready then.  But hopefully by the next OPS, I’ll have a paycheck or two and can pitch in.

This Subtitle is in Bold Letters

I also picked up a handmade poster from Linsday Verrell, who sang two songs and played cello along with Jeff Johansen to back up troubador, Vermonter, painter, bicyclist and nice guy Ethan Azarian, who happens to be married to a former boss of mine.  We also have another cool connection.

A Dude attended college for a time in Vermont, and on a trip a few years back picked up a t-shirt with some artwork by Ethan’s mom.  Small world.  But I wouldn’t want to paint it,” Stephen Wright the Boston comic used to say.  Anyway, the poster reminds me of a quote by German poet J.W. Goethe but that is actually by Scottish mountaineer:

“Until one is committed, there is hesitancy, the chance to draw back. Concerning all acts of initiative (and creation), there is one elementary truth, the ignorance of which kills countless ideas and splendid plans: that the moment one definitely commits oneself, then Providence moves too. All sorts of things occur to help one that would never otherwise have occurred. A whole stream of events issues from the decision, raising in one’s favor all manner of unforeseen incidents and meetings and material assistance, which no man could have dreamed would have come his way.                  –– William Hutchison Murray

I’m using it to apply to writing, but it’s applicable to any area of your life that you’re struggling with.  Maybe you’re considering bicycling, or asking someone out, or demanding a raise from your boss.  Of course it’s easier said than done and sometimes  not thinking things through rationally is mistaken for boldness, so it’s good to know when to stay in your lane.  Below are Ethan, Lindsay and Jeff (playing saw). 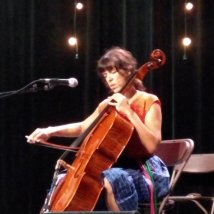 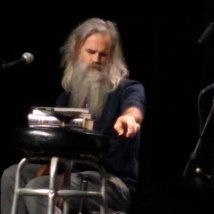 Part of the event is designed to meet other people.  I spoke with a woman who writes fantasy novels, After the event ended I hung out while Ethan, Owen and their friend talked nearby, occasionally including us.  Then there was Ted (a student who not only bikes but shares my same last name (ABikes – ha ha!) and whom I introduced to Owen who invited him to be a reader a while back; Jordan (also getting back into acting); Nick (her husband, who wore a cowboy hat unironically and who has a book deal) and Sam (a young woman aspiring to be an actress), and some friends of hers who showed up on bikes.  Gareth, the brother of Owen, also read.  Interestingly, he’s got a bit of a Scottish accent, being older than Owen when the family moved here.

Inspiration Is Nice, but Doesn’t Pay the Bills 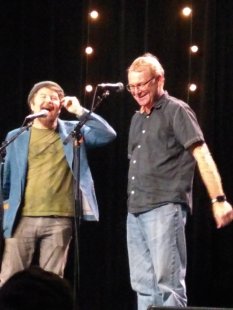 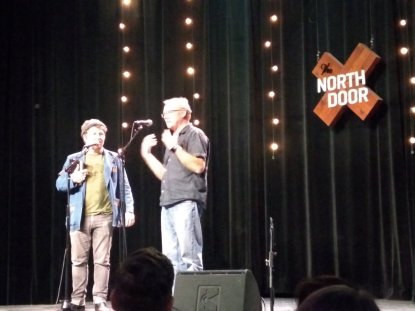 The thing about One Page Salon is that while it’s going on it’s easy to think, “Hey, these people got book deals or self-published, and I’m as smart as them, so I can too.”  To some extent, that may be true.  But the fact is that they have done it, and I haven’t yet.  So until I actually finish the first draft, get people to start reading the book as beta-readers, and and then try to publish it, that’s all just a dream.  Meanwhile I do have bills to pay and need to figure out how to do that.  It’s the ongoing struggle everyone save the wealthy have to deal with.  Someday maybe I’ll figure it out.  Until then, I’ll do my best to keep blogging Mondays, Wednesdays and Fridays, and write my book the other days.  If you’re in Austin, check out One Page Salon at the link above.

4 thoughts on “Finding Inspiration from Local Authors at One Page Salon in Austin, Texas”