A friend admitted the other day that she was enjoying walking more than bicycling around Austin lately.  That’s because she notices more things going slower on two feet than on two wheels.  I agreed that’s mostly true, but also said you still see some pretty cool stuff biking that you’d never notice whizzing by in a car.  Today was no exception, and a beautiful spring day to boot.  Please continue reading where it says Continue Reading!  (Be sure to scroll all the way to the bottom — WordPress inserts extra white space I can’t get rid of sometimes.) 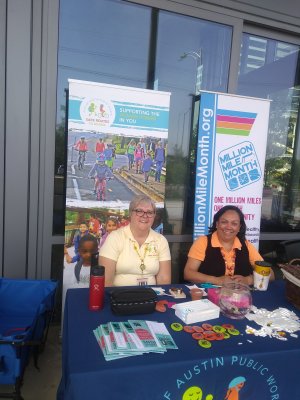 I was returning the DVD of Spiderman:  Homecoming (fun and more in the original spirit of the young hero) to the Austin Public Library’s tremendously gorgeous new main headquarters when I happened upon a mini-festival of sorts.  Of course, being unemployed, I got some free snacks (beef jerky, V-8 low sodium and almonds) and also picked up a free compost bin.  All wins for Team A Dude Abikes.

However, I was most interested in the Safe Routes to School (SRTS) table.  Rhonda and Letty were happy to tell me about it while giving me reflective tape to add to my bike and helmet.  A Dude Abikes sure loves stumbling upon free and helpful stuff!  Simply put, the mission is:

“Safe Routes to School programs aim to make it safer for students to walk and bike to school and encourage more walking and biking where safety is not a barrier.”

It’s a no brainer, and hard to argue against that.  The program had it’s origins in 2005, when federal funds were first apportioned.  Ironically, the money came from the Federal Highway Administration.  According to their website, in the late 60’s, half of children biked or walked to school. Now it’s only 15%.  This affects traffic, pollution and health, so is a trend worth trying to reverse.

In Austin, the program is housed within the Public Works Department.  Their goals are: 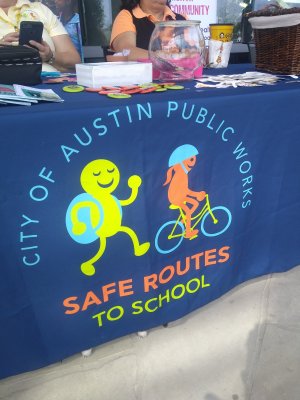 “Safe Routes to School Program educates students on pedestrian and bicycle safety and provides crossing guards at crucial intersections. Our mission is to reduce barriers that prevent students from actively traveling to school. We do this by providing crossing guards at warranted locations, educating students on pedestrian and bicycle safety, and engaging with the community to increase the number of students who choose human power to get to school.”

I’m proud to say that I was part of the effort to pass the 2016 Mobility Bond which provided $27.5 million for SRTS improvements.  I’ve already seen two improvements in my area:  the finishing of a sidewalk that just ended, causing people to walk through a small forest and mud to get to the next sidewalk.  And also a street light near the high school.  I can’t say for sure these are SRTS funds, but the improvements are welcome.
Ironically, the principal of the school once told our bike lane committee that she was opposed to protected bike lanes.  The reason was that more kids would bike to school, and the roads were too dangerous!  Well, that’s the whole reason for protected bike lanes, genius — they make it safer!  Hopefully we can change her mind, or the City will just go ahead and simply install the protected lanes anyway.  It’s called progress.  Which, as everyone knows, is the opposite of Congress.  (Political pun – zing!)

The Dog That Nearly Ate Me

I was biking back from somewhere Tuesday when out of nowhere a big black dog appeared right beside me.  I kinda freaked out and started yelling at it.  It wasn’t being super aggressive, but it is not the sort of thing you want happening when you don’t have insurance and must rely on the safety net community clinics if you were to get bitten or knocked over.  Or knocked over then bitten.  That’s because — let’s be honest — that net has plenty of holes in it.  Six to nine months to wait for a specialist — are you friggin’ kidding me?  It’s enough to make me want to move to Spain or France.  Or both.  Hey, what if they merged?  Would it be called Sprance or Frain?

Anyway, the owner realized what was happening and called the dog off.  Danger decreased, I circled back and let the owner know in no uncertain terms (with some very loud and repeated colorful expletives deleted here) that I wanted him to lock to dog off or I would be calling APD (the police).  I had quite a bit of adrenalin pumping so didn’t really restrain myself, and being angry was the appropriate response to get my message into his thick head.  He claimed the dog was chained up but he got off the chain and would put him in his truck.

Maybe that was the case, but there was no quick action to chase after his dog, or any visible remorse or apology, which led me to believe he didn’t give a shit about passersby or his dog.  So I went ahead and called the City on his apathetic ass, and Animal Control was going to come investigate.  I made sure to point out that the dog was not vicious, but it was the asshole owner.  And sure enough,  when I passed by a short time later, the car door was open and who knows where the dog was.  Much later, as he’s pictured below, he was chained up since the fence isn’t complete.  This is bad for dogs, too.

Oh, by the way, this is the same house that Austin Police SWAT (Strategic Weapons and Tactics) stormed last week with loudspeakers, shutting down the street, and concussive grenades, since the meth-dealing junkies inside refused to come out.  He’s in jail now, but I don’t know who this dog owner is.  Today there was no guy, no truck and no dog, so score one for me.

(Keep scrolling to the bottom – WordPress puts in extra white space I can’t get rid of!) 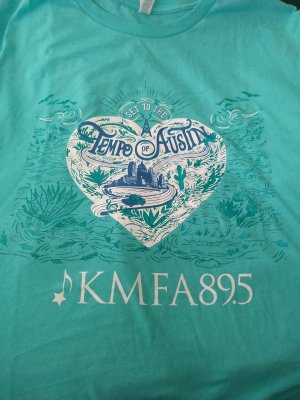 I passed by the classical music station and picked up this free t-shirt.

Come back Friday for some more news you can use!

A DUDE ABIKES INVITES YOU TO PLEASE:

16 thoughts on “Safe Routes to School & The Dog That Nearly Ate Me. Oh, The Things I See Bicycling in Austin!”