If you live in Austin and have read the local newspaper in the last 30 years, you probably know of Michael Barnes.  He’s been covering arts, entertainment, culture, history, the city and its people and changes and more in some form or another in the Austin American-Statesman for most of that time.  He’s also written two books, performed and taught theater at the University of Texas and St. Edwards University among other things for many years.  He has a diverse presence on the internet with several blogs and social media sites, and probably alot of other things I’m sure I don’t know about.  He also has a doctorate in theater, and oh, by the way, last year he was 2017 Best Journalist in the Austin Chronicle Readers Poll.  So when I casually invited him to connect and he did, and then he invited me to meet him for coffee, what was A Dude going to say?  I said yes, of course!

I hoofed it on downtown (“It’s ALL downtown, George!”) to meet Michael at a coffee shop in South Austin.  It was 91 F on my Garmin, but sure felt like 100 F with the heat index.  He had iced tea and I had Powerade Zero that I brought in my water bottle.  Over the next hour we chatted about his beginnings in theater and then journalism, which was kind of a fluke.  He was doing alot of writing for school, and a professor recommeded him to the arts editor at the time, one thing led to another, and here he is, best journalist in Austin!  Here’s his latest piece, about Austin Camerata, a classical music group, which is one of A Dude’s passions.  It’s clear, clean, concise writing, just like you’d expect from a polished professional. 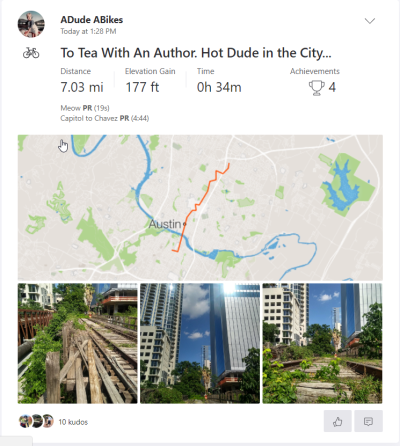 Michael appears serious but has an easy smile and laugh.  Of course, he’s a good listener.  He’s also modest:  he didn’t want a picture when I asked if I could write about him in my blog.  (It wasn’t my plan to, but he’s a really interesting and accomplished guy, so how could I not?)

When I confessed to  curiousity about why he wanted to meet, he said that I had initiated contact, which was true.  But he was curious to hear my story.  We didn’t have time for many of his personal stories, and he kept bringing things back to me (as I tried to make it about him), like a journalist does.  It was an interesting back and forth conversation.

Tips from a Pro

Michael shared his belief that writers should share their knowledge freely, so he had some recommendations for me, which I’m happy to pass along:

I was really grateful for the time Michael generously shared with me, and hope you’ll go look at his work.  To learn more, start here with his Twitter page.

PRIVACY NOTICE: This site, https://ADudeAbikes.WordPress.com, like all WordPress sites, uses cookies, so if you leave a comment it collects your email address, identifies your IP address, and it may collect other data unbeknownst to me. I am looking into how to comply with the European Union General Data Protection Regulation. In the meantime, if you do not wish to have any personal data collected, please go to www.ADudeAbikes.com. (That is currently just mirroring the WordPress site, so no data is collected there, according to the host.)

2 thoughts on “Conversation with an Author: Michael Barnes”