After last Friday’s post, Part 2 of my interview with David Walker, I decided to not publish a blog Saturday or Sunday. I think it’s a really interesting story and fairly well written, so I wanted more people to look at that instead of pictures of cats. Nothing against cat pictures or other things that I’ve been putting up on my book-writing days, of course! I also just wanted a break, so I took one. Absence makes the heart grow fonder, they say. Here without further ado are a recap and photos from my weekend.

Walk This Way, or However You Please — Just Walk

Continuing my daily half-hour walks may be no big deal to you runners or to those who have been walking for years. If you don’t, maybe I can inspire you. Walking is really good for you. To me, it’s a new commitment to exercise off the bike (besides my 4+ years of daily yoga). It’s also a challenge: “Don’t Break the Chain.” I wrote about this way back on January 2 in my post that brilliantly links Seinfeld and The Juiceman.

The point was the idea of starting a habit and then doing one’s best to not stop. I think I missed one day, but so what? I more than made up for it by doing double walks for 18 days and regularly surpassing 10,000+ steps during South by Southwest. Sometimes it really is a chore to get myself out the door, I somehow keep doing it, so far. A small step for humanity, a giant step for ADudeAkind. Maybe I need a new blog: A Dude Ahikes?

It’s your duty to move your booty! –-A Dude Abikes

Saturday, the cycling friend who scarcely ever cycles came by and we caught an excellent film, A Quiet Place. The silence in the soundtrack and in the theater was terrifying! Not much can be said about this that won’t be a spoiler, so I’ll just encourage you to go see it for yourself. It’s more suspense than horror, which appeals more to me. Lately though, after the viewing of Owen Egerton’s festival of bloodiness called Blood Fest which I caught a premier of at SXSW, I’m beginning to appreciate the genre.

After skipping riding for several days due to weather and tiredness, I waited for the temperature to warm up and headed out on a still crisp but sunny Sunday afternoon. It was like a New England day in the early fall before it gets down to 8 friggin’ degrees. I had no particular place to go but had it in mind to use my Movie Pass yet again. I got in almost 30 miles for the day, my best for the year. That ain’t saying much given how much I used to ride, but my health challenges persist. I don’t go as far or as fast. I dsilike the phrase, but it is what it is. Everything changes, especially our bodies, like it or not. We persist.

Soon after starting, I saw a woman taking a cat for a walk, so I had to stop. I met Brie, who found him in the trash. He has a big Instagram following you can check out @trashcat_adventures_of. TC wasn’t in a good mood so they put him in his space age backpack with a bubble window. Pictures of that didn’t come out though.

Not too long after that, I saw a woman on a bike I recognized. Beth was part of a Bike Austin event. Having no particular place to go, I slowed down and we chatted and rode together on a road with bike lanes popular with Austin bicyclists called Shoal Creek for a while. She was borrowing some cold weather gear to go on a bike trip in the Canyonlands of Utah. It sounded like a great trip. We parted ways and I wished her well.

Pretty quickly I came upon some yard art of a tree trunk made to look like a HUGE spider. Austin has all kinds of art in public places but it’s always cool to stumble upon something unexpected that’s more personal. Whoever did it (kids, I’m guessing), did a great job making it look real but also whimsical, with rabbit ears.

Maybe it was a science experiment gone bad. I continued on and added some miles on a flat but windy road called Jollyville. I guess I was in a pretty good mood because it was turning out to be a pretty photogenic bike ride. I stopped at a convenience store where I indulged in some reduced price lefotover Easter candy. It had peanut butter so I rationalized I needed the protein and sugar to keep up my energy. Putting up some fallen water bottles, I headed back toward one of the art house cinemas we have in Austin called the Arbor.

I was just in time for a showing of Gemini. I described this film in my Strava ride as “An atmospheric action and mystery movie, a moody meditation on celebrity, beauty, love, loyalty, success, privilege, jealousy and of course, Los Angeles. Good!” Exiting the theater in a kind of dreamy state, I saddled and layered up. Riding home in the dark and cold, I realized I’d had a pretty good day despite feeling blah. Biking almost always puts me in a better mind-body-emotional state. That’s why I think more people ought to do it.

How was your weekend?

Well, that’s all he wrote for now. Tune in Wednesday for another day in the life of A Dude Abikes! Or possibly something else about biking or chocolate or whatever tickles my fancy. Whatever that is. 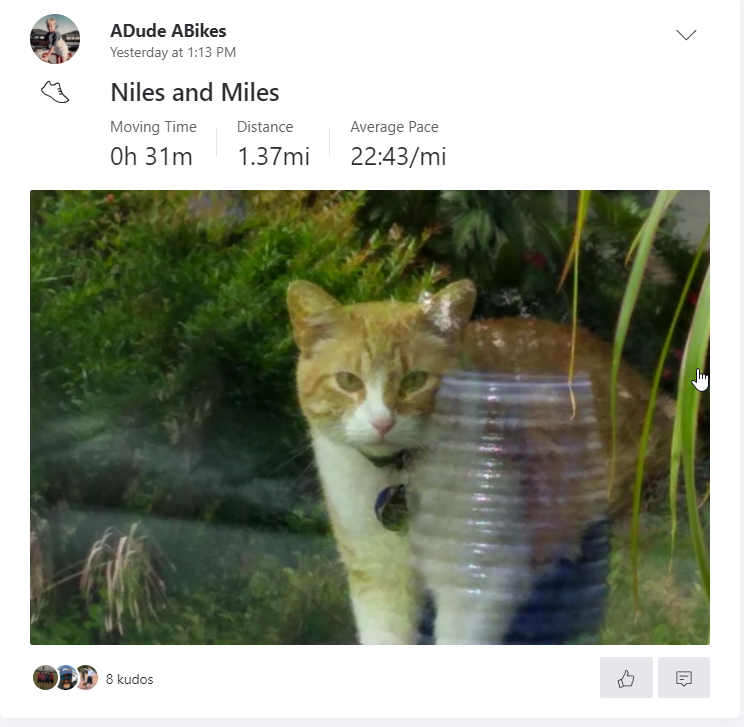