Perfect Is the Enemy of Good

I don’t know who said that, but my dear brother has repeated it more than once.  I was reminded of the phrase when I realized I was not going to be able to ride my bike today.  Despite a high temperature of 64 F, it was windy and cedar pollen count was in the high category.  This happens every winter in Central Texas as the juniper berries release a viscous, visible and very nasty allergenic yellow plume that coats everything and sends some of us into fits of paroxysm.  Another reason to not move to Austin!  Combined with other ailments, it is a “double plus ungood situation.”  British author George Orwell wrote that in his disturbingly prescient book 1984.  About 2018 government shutdowns, bi-partisan extension of US government spying on its own citizens, El Grande Pared de Mexico (great wall of Mexico), he would be saying “I told you so.” 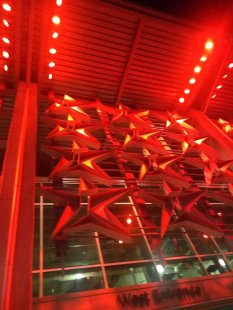 Changing lights outside the nearby community college.

A sign inside reminding everyone to start at the beginnning.

In my case, cedar fever manifests as a dry cough, headache, dizziness and fatigue.  By the time I figured out what was going on, it was too late to benefit from an anti-histamine.  So I rode a mile to my appointment, walked home, am trying to crank out this blog, then do yoga, and now with a cough drop and allergy medicine, maybe then I can rest.  A perfect day on the bike?  No.  Yet, good enough.  Same with my content.  Is it going to win any awards?  Maybe not.  Is this post all over the place?  Definitely.  But is there a mixture of personal anecdotes, bike advice, sharing my experiments and experiences in health and nutrition good links and photos that ultimately may inspire?  I hope so.  And so do a growing number of readers.  Thank you for that!

While I’m unable (and it’s medically unwise for me) to stick to the strict (and I believe error-laden) script of a plant-based, paleo or a ketogenic diet, I am meeting my main goal:  more fibre and nutrients from natural sources.  This morning was a spinach, orange, mango, papaya, Greek yogurt, flax seed, hemp protein powder smoothie (see below).  I accidentally put some savory Mexican spices in it instead of cinnamon at first, so I had to disguise it with all the other ingredients.  I also ate the papaya seeds which made it crunchy and a little spicy.  Tonight was more cabbage, cauliflower, lentils, brown rice, and turkey breast.  Someday soon I want to really experiment with some recipes once I get better organized.  Maybe I will, maybe I won’t.  That’s OK!  Not perfect, but good.

Yes, I’m still craving processed carbs at times, but I think I’ve sufficiently turned the corner with changing my taste buds that I may be able to just keep avoiding them.  At some point I might relent but I won’t get too upset about it.  Funny how the mind works.  Focusing on the positive like “Yum, I can has apple with peanut butter!” instead of “Man, why can’t I have a bag of crisps or pint of ice cream?” turns down the noise on the latter.  And there’s no guilt with the former.  Sorry for the English words that have crept in; I have a few likers and commenters from Down Under to thank for that.

And speaking of those living where English is spoken properly, I would like to highlight one new follower, The Sultry Single Speeder  He’s apparently a bike rider and mechanic in Scotland preparing for a 24-hour race.  A shout out across the pond, my biking brother.  Are you perchance related to A Dude, of the Clan McDude?  (Yes, that’s a Highlander reference.  I couldn’t resist.  But I promise that will be the only reference, because “There can be only one.”  Ha!  I tricked you, didn’t I?)

Speaking of the United Kingdom, today I won tickets on the radio to a one-man show by “celebrated Royal Shakespeare Company actor Paterson Joseph (HBO’s The Leftovers).”  Now, I happen to be unemployed and on the dole (or the Bob Dole, as I like to say).  With my need to be resting more, I am home alot and able to hear the radio.  I enjoy KMFA 89.5 FM, which is available online too.  That makes it easier to win.   I scored a number tickets before I got laid off the job, too.  Was any of that just all dumb luck?  Or was I somehow willing it to happen?  Like in The Secret or other New Age pabulum?

Neither.   If everyone could manifest a million dollars we wouldn’t have the pompous millionaires and billionaires on Shark Tank.  It was random, though I still had to take the initiative.  When I got the host Diane Donovan on the air, she was gracious enough to chat for a moment.  Canadians are generally so nice like that (another reference to the Queen’s empire).  A Dude interviewed for a job there a while back and didn’t get it.  So I suppose I was networking a bit.  I’d love to sit down with Diane and have a chat about getting into the classical music business.  For now, biking and blogging and all that is my focus until I find paid work.  Unless of course I can make the biking and blogging pay somehow….

I offered the ticket to a gentleman who has offered some advice about my website.  His da had a long involvement with the theater department at the university where the show will be.  He’s also a cyclist.  All coinkidink as one of Lily Tomlin’s TV characters said?

Maybe.  I guess my point is that it doesn’t hurt to do visualisation, affirmation, or other such practices.  Ever need a quarter then find one?  Or be thinking about a song then it comes on the radio?  Have $20 in your wallet then your bill at the store comes to $19.95? Maybe we’re all a little psychic at times when we’re in the flow or zone.  This can happen while biking or in many other pursuits.  So, can I make myself rich, thin, popular, or whatever by thinking about it?  Probably not.  But who knows?  I’m just some dude.  I’m like David Duchovny’s Fox Mulder in The X-Files:

What’s my message from all of this?  Get out there and do stuff, and often, good things will happen.  Maybe they won’t be perfect, and sometimes, yes, they will be bad.  But often they will be like Larry David from Curb Your Enthusiasm says, “pretty, Pretty, PRETTY good!”

For A Dude, a good story helps.  Most of the links I slaved over compiling I have at least some familiarity with.   What keeps you going when you’re down?