Nothing in the world is worth having or worth doing unless it means effort, pain, difficulty… I have never in my life envied a human being who led an easy life. I have envied a great many people who led difficult lives and led them well.

Bike Life Is Hard; The Struggle is Real

Bicycling on average of almost 100 miles a week for the last two years, totaling 10,020, was damn hard. I don’t think I’ll ever be able to really put in words what I went through to accomplish it. Yes, there’s much more serious suffering in the world, and I’m not comparing war, poverty, disease, accidents or having to even look at or listen to US President #45. However, when I put “suffering” in my posts as a key word, I am not kidding. I often truly suffered while biking. But I’m grateful for making the choice to push myself far beyond my limits or expectations of others who believe people with excess adipose can’t kick some serious ass. Wrong!

Some people say biking IS suffering. Strava has a “Suffer Score.” From saddle sores, to wrecks, muscle pain and cramps, nearly getting hit, maimed or killed by shitty drivers every single day, cold, wind, rain, snow, 100+ degree Fahrenheit Texas summers, and hills – gott im himmel, the hills! – and of course being on a bike for 10 hours riding 100 miles in a day four different times, twice back to back — is super [expletive] challenging. Even more so when you’re overweight, not so young anymore, and a full-time desk jockey until I was laid off a few months ago. (Anyone wanna hire A Dude?) So yes, the struggle is real, as those who do any sport at some distance and intensity know. But it’s nothing to be afraid of: Suffering forges you into a better, tougher, fitter you. And that’s way (weigh? whey?) more important than a number on a scale.

Always respect your limits, but just know this: There’s nothing like being able to one day climb up that formerly formidable hill on your bike in top gear at a good clip while your riding buddy (and the old you) labor up it sweating and panting. Of course I have plenty of good times biking, or I wouldn’t do it (although I am without a car so pretty much have to bike, or suffer riding the bus. Homelessness stinks! In both senses). There are figurative and metaphorical downhills, after all. Fun note: A Dude Abikes’ top downhill speed? 51.7 miles per hour at Circuit of the Americas bike night.

Eating Vegan for 7 Days Is Not a Piece of Cake; Soup Peddler is Delicious! 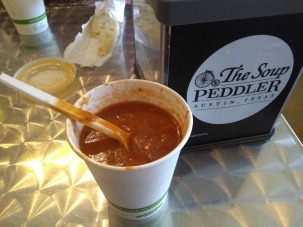 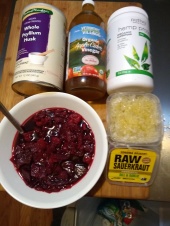 The number on the scale is still important to try to reduce, though. Three days of juice fasting and two days transitioning to a vegan diet – at least for a few more days – have had their own share of intense discomfort. Headaches, brain fog, fatigue, constipation, and more I won’t go into. It’s been pretty difficult because for years my diet has been not the worst, but with alot of room for improvement. It’s what Seinfeld’s Estelle Costanza would say if I were George, her son, “treating my body like an amusement park.” All that “carbing up” with Clif Bars and the like may have preserved some muscle, but it hasn’t helped with weight loss.

I didn’t coin the term “fathlete” – someone who is athletic but overweight — but I did think of it by myself. At some point my metabolism just took a nose dive and never recovered, despite numerous attempts to lose weight. That’s a medical fact that contributes to “the situation” as do genetics, pollution, age and so on. However, my cardio health is fantastic — about a year ago I aced a very hard treadmill test (A Dude does not run) and then I biked another 20 miles home. But the fatness persists, much to my chagrin. But nevertheless, I persist. And that’s perhaps le raison d’être of this blog: to inspire people who may be just like me, not a razor-thin racer, but working on doing better — being a little less of fathletes. Or lazy. Couch potatoes. Etc. I’m proof that one can be overweight and still fit AF as the kids say, at least on a bike. I daresay most guys my age and weight are not out there 10 hours a week cranking out the miles, week after week.

The pictures were of: a piece of cake on the wall of Jerry’s Artarama, which I did not lick or scratch and sniff; some tomato basil soup I bought while meeting my job search buddies at the Soup Peddler Real Food & Juice Bar (cool because their logo is an old penny farthing bicycle because the founder used homemade bikes for soup deliveries); a beet, cabbage, potato, onion soup I made; and some food products I’ve started using: psyllium powder, apple cider vinegar, hemp protein and raw sauerkraut.

After my second day of soups and solids, including a fruit smoothie, nuts, apple and peanut butter, let’s just say the eagle has landed. And I’ve lost about 10 pounds, much of that water and maybe some muscle, which will bounce back. I’ve put the experience into a whimsical, Dr. Suess-esque rhyme for your amusement:

When He… The Poo

I had to skip to the loo.

Finally! It was time to poo!

Was red, not blue,

Nor blood, because I remembered I ate beets.

No, my poo is not usually blue, it was needed to make it work, as in “roses are red, violets are…” Well, I’m well over my word and time limits again, so here I better git ‘er done. As we say down here in Texas, “Good lord willin’ and the crik don’t rise,” A Dude will be back again tomorrow with next steps on the journey. Hope you’ll join in. Best wishes on urine travels! I mean your own. Oh, and here’s a photo of Yoga With Adriene and because her dog Benji is sometimes in True, the excellent 30-day video series I’m following, here’s the cat’s tail, denoting that we have reached the end of our tale. 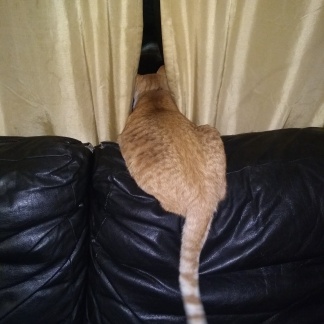 Not I, nor anyone else can travel that road for you.
You must travel it by yourself.
It is not far. It is within reach.
Perhaps you have been on it since you were born, and did not know.
Perhaps it is everywhere – on water and land.