The short answer is this:  I don’t know.  That’s the first thing that comes to mind a month after my personal best on a bike.  It was definitely a peak life experience.  But it sometimes seems like I imagined the whole thing.  I mean, who does that distance in a car or motorcycle on an average weekend, much less on a friggin’ bicycle?  There was wind, heat, hills on day one, and wind, cold, rain, and hills on day two — repeat riders say it was the hardest in a decade.  There were 9,000 other people out there (I never claimed to be special.)  Yet there are GPS maps proving I did it, and well, Strava doesn’t lie.  So when I think back to the entire experience – the rolling community of all kinds of people with all kinds of bodies on all kinds of bikes, the lush, rolling, green countryside, and of course, the sweaty, serene and sometimes serious suffering – it seems surreal.  But I definitely, most certainly, indubitably did it.  I have witnesses.  Here’s how I did it.  And many of you can too.

I Doubled My Centuries with a Double Century

Riding 100 miles in a day is no joke for a fit but unskinny xx-year old.  Whether I could do it two days in a row was the big question.  As with any athletic undertaking, Power Point presentation, or rock concert, one must prepare.  So I trained.  Hard.  A Dude did both in-town rides with the Deloitte and Oceaneering teams, and out of town overnighters.  Occasional riding buddy Gregg took me to overnight camping trips for the Salado Smokin’ Spokes and the Austin Easter Hill Country Tour in Kerrville.  The latter involved a 90-mile ride, 81 of which I did solo and after four of the five rest stops had closed.  Not sure how I did that one either.  But all that riding got me ready.

I guess it’s a combination of things:  preparation, nutrition (not always the healthiest, but eating enough to not bonk), hydration, supplementation, intention, effort, support from friends, family and fundraising donors, and a fierce desire to never SAG out (get picked up by ride volunteers and taken to the end).  Then it’s down to good or at least tolerable weather, the luck of not having flats or mechanicals, and after that, all that’s left is just plain having the guts to just go for it.  You take what gets thrown at you:  weather, delays, diarrhea, unskilled riders nearly causing you to crash, cars whizzing by, bugs, bad roads and debris, unexpected hills and turns — whatever it is, you do one thing:  Just.  Keep.  Pedaling.

Which is what A Dude Abikes does.  Slower than many, faster than some, and more than those who don’t even try.  So after riding 104 miles in the Hill Country Ride for AIDS on 4/28/16 and 108 miles in the Bike Austin Armadillo Classic on 10/29/16, I now have four century rides under my belt.  That’s not a big deal to many bad ass riders, but they probably aren’t bothering to read this blog.  (If you are one of those hammerheads, yes, you’re awesome, but try not to lord it over us slowpokes, alright?)  But it’s four more than I had 13 months ago.  I can be proud of that, and I am.  As the verse from Proverbs says:

Pride goeth before destruction, and an haughty spirit before a fall.

It’s All a Blur

There’s not enough space or time to recount the entire journey, even if I could recount each mile.  Many were literally a blur.  As usual I struggle with just getting something written.  I hope to write more later as well as post photos and someday even video.  For now I’ll say that that it was a great experience, and if you donated or otherwise helped, thank you very much.  A separate list will come out about that.  But if you haven’t donated, there is still time.  $20 is .10 per mile.  $200 would be $1 per mile.  And so on.  The money goes for treatment for people suffering from Multiple Sclerosis and research to advance treatments and someday hopefully find a cure.  To give, please go to this link: 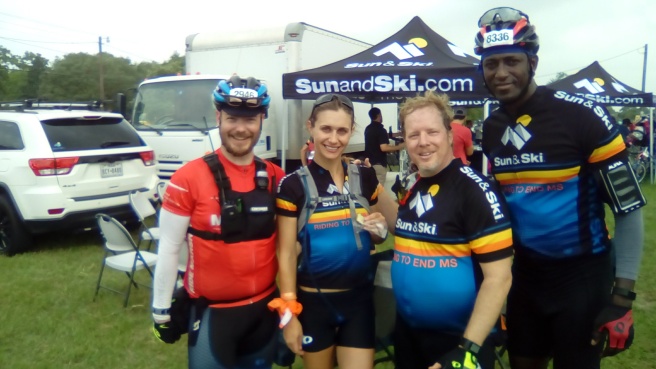