Saturday it wasn’t raining for a change, and I was heading tired and home from some errands near the Peddler Bike Shop when I saw a group ride approaching.  I inquired what it was about, and one woman said, “Join us!”  Always looking for more miles to ride and new people to meet, I obliged.  Turned out, it was a women’s group ride, but since it was a special occasion, they made it co-ed.  And since most group rides tend to be other dudes, and while I enjoy hanging with other bros, I saw it as a rare opportunity to “ride like a girl.”  By that I mean just as awesome as a guy but backwards in heels, like Ginger Rogers.  Just kidding.

The Biking Betties has some overlap with Social Cycling Austin, which does the Thursday Night Social Rides.  In fact, I recognized the leader of this ride, Bianca, from a previous TNSR.  There were a copule of dozen peole, including a number of men.  Everyone was nice except one woman who enjoyed being a bit rude, but obviously for fun.  The think about SCA rides is that they aren’t so fast paced that you get all strung out single file and you can actually have conversations.  They’ll stop and wait when the group gets split up, and have little breaks, and also usually end at a local watering hole.

In this case, we were heading downtown, and partly on the exact same route I had just been on, which was a little weird and gave me some major deja vu.  Chatting with , Rebecca, who had invited me, I learned her husband had just had a big crash and got hurt pretty badly.  Her friend Tinisha had the lightest green eyes I’d ever seen.  They weren’t regulars but had shown up for fun.  I met Cayla, who is Dominican and Puerto Rican.  Kyle is friends with one of the women, and James is married to one; he admitted to being a bit inebriated.  There were other names and people I didn’t get to talk with. 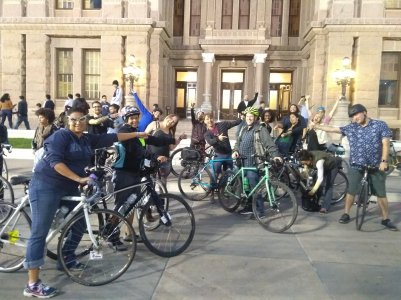 That’s me in street clothes and yellow helmet with Sophie the sea foam green Fairdale Weekender Archer.  Approaching the state Capitol, we stopped for a bit.  I offered to take pictures, since I was the rando guy passing by on his bike.  Then I was rewarded by someone who offered to take a picture with me in it, and she told everyone to point at me.  It’s a pretty funny picture, actually.  I felt welcomed and a little bit like a celebrity for about 45 seconds.  It’s a festive group.  Kim had a bluetooth music player cranking out tunes by Stevie Wonder and others, and some of the Betties wore funny things like the big sunglasses you can see on the left.

Finally arriving at the destination, a big warehouse split into various businesses, there were people not on the bike ride there to greet us.  There were decorations, music, a light show, photo backdrop, the ubiquitous beer and of course a birthday cake.  Since I didn’t know anyone I just kind of wandered around and chatted with whomever.  I had a sparkling water and some nuts and goji berries that were offered, but of course no pastries.  Despite eschewing (an odd word to describe not chewing something!) processed grains all year with extremely minor exceptions (the flour in Beanitos), I haven’t noticed any health benefits.  Still, I plan to keep up the practice for the rest of the year and hpefully beyond if I can, though maybe less strictly.

But I digress.  Since the site was a t-shirt printing company, they were making them with the logo.  My shirt was sweaty and so I missed the chance to get one.  However, I might get to ride with the Biking Betties again.  The catch is if you’re male you have to wear a dress.  I could probably pull off a kilt if I had one, being partly of Irish descent.  But definitely not traditional dress style (without underwear).  As the party got into swing, people were drinking beverages, talking, talking pictures, changing into costumes, and basically enjoying each others’ company off the bike.  I had some conversations about the state of bicycling in Austin, and started to tire out without much food and sleep the night before, and felt a little like the interloper that I was.  When Bianca announced that the dance-off was about to start, I watched a couple of people shake their groove thing, and took that as my sign to bike home.  I like most music well enough, but A Dude don’t dance.

This is the second spontaneous group ride A Dude has been on in a month, and I’m just struck by the fact that such an experience would not have been possible for the old me.  That’s because I’d be at home not riding my bike but watching TV.  I still do plenty of that, but it underscores one point of my philosophy about bikes:  Get out and get on one, and good things tend to happen.   After all, biking is supposed to fun, not just exercise, or trying to meet goals, right?

What are some good things that have happened to you while out bicycling?   Have you joined group rides on the spur of the moment?  I’d love to hear in the comments.  Ta-ta for now.  ADAB… OUT!