I was going to write about how I’m unable to bike for a while, or the heat wave (109 F forecast for Monday!), or possibly put up pictures of my collection of bike t-shirts.  Then I saw this sad news that made me do a double-take because it’s just crazy.  There’s not much to know at this point until they catch the guy who did it.  And what’s making this more news than it might be otherwise is that the victim was Dr. Mark Hausknecht, a cardiologist to former US President George H.W. Bush. Houston, we have a problem.  It’s you.  Quelle bizarre!

Meanwhile, in the crazy-good Houston bike news department, Lawson Craddock, whom I wrote about recently (Texan Lawson Craddock Breaks Scapula on Day 1 of Tour de France, Just Keeps Riding. Quelle Courage!), is still riding in the Tour de France and donating $100 for every stae.  His GoFundMe page, which you should definitely contribute to, has now brought in over $114,000 for the Alkek Velodrome damaged in Hurricane Harvey.  Since it’s used to train the next generation of cyclists, it’s a good cause.  Read more about both these crazy stories below!

Regardless of the fame of the victim, it’s just wrong to shoot cyclists.  Duh, so obvi!  But if you think it’s a one-time occasion, you’d be wrong:  It happened in Austin last year!  A stupid fucking asshole who was pissed at his girlfriend and beat her up made a friend — at gun-point — drive him around to “blow off some steam.”  He then used a shotgun to blast pellets into the head, back and shoulder of a guy riding a bike. (“Man Accused of Firing Shotgun at Cyclist in Southeast Austin”)

Fortunately, even though the victim had pellets in his brain stem, he survived.  The guy was arrested and charged, though I don’t know what sentence he got and is serving. Hopefully a very long one, but since he “just” shot “only” a cyclist, maybe he’s already out of jail.  There isn’t much punishment for car drivers who maim or kill a cyclist, but maybe shooting one will get you two slaps on the wrist instead of one.

What was going through the mind of the shooter is beyond me.  He wasn’t wearing a helmet, so we already know he didn’t have any common sense.  And it seems random, but who knows?  The fact that the victim has a relationship to a former US president makes it a little suspicious.  Of course I didn’t know the guy, but looking at his goofy picture, big ears, and tall, lean, frame, you can imagine him being a fun guy to go on a really hard and fast bike ride with.

One thing is certain:  the fucking National Rifle Association will defend cyclists right to shoot other cyclists.  Especially if the offending cyclist thinks you are not worthy of being on the road and judgmentally criticizes your bike, your skills, kit, speed — and especially your weight.  I say that tongue in cheek but we don’t have a well-regulated militia, so I say FUCK NO to one more person hiding behind the 2nd Amendment to use an assault rifle to kill children at school.  And it goes without saying that I also say HELL NO! to senseless murders of anyone, including a heart surgeon who saved lives and rode bike and probably never hurt a flea and certainly didn’t deserve this.  Whoever the perpetrator is, I hope he gets his approriate karma.

I have a prediction:  a memorial bike ride will be created for Mark.  As it should.  But cyclists will still get killed due to lack of infrastructure around the country, and car drivers will receive little if any punishment for it.  For more on this story and a video, go to this Houston Public Media link.  I’ve messaged the chief with whom I’m acquainted in passing, and if I have updates I’ll post them here.  Although they will surely be on the news sites immediately once known.

The Good News About a Different Houston Cyclist 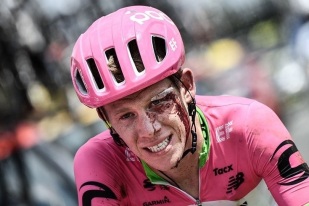 After his crash on Stage 1 of the Tour de France due to an errant water bottle in the road, Lawson Craddock did what any professional cyclist would do if he at all possibly could:  he Just. Kept. Pedaling.  I’m way behind on the stages but know that he’s still in it because I get his Strava feed.  So his $100 per stage is not alot, but the people donating have really stepped it up.  The Velodrome was

I’ve seen some additional footage and interviews with Lawson, including while being worked on by the team Education First chiropractor and masseur.  He grimaces through alot of pain but describes how he can’t get out of the saddle (bike seat) because that requires putting pressure on his shoulder.  But he feels he’s getting stronger and somehow just manages to stay at the back of the peloton (pack).  He’s dead last in the race but he’s also still in the race.  That by itself is a major accomplishment.  Six riders left due to crashes or illness, and surely more will come.  Go Lawson!

Well, that’s a remarkable juxtaposition of two wildly disparate bike stories.  That’s Texas and Texans for you. Super polite, until they’re giving you a hug while stabbing you in the back.  Or, gallantly biking 2,000+ miles including the freakin’ Alps and Pyrenees Mountains at high speeds all with broken bones, gashes, terribly painful muscular aches and pains, and using that pain to raise money to help kids learn to bike.  It was the best of Texans, and the worst of Texans.  Let’s hope the good ones prevail.  Keep the rubber side down, people.