Since I’ve been feeling a good deal of discomfort and sometimes pain in a certain area on and off, and I am sick of the heat and thus waiting til evenings to ride (not to mention still watching tons of World Cup football matches on delay as well as the Tour de France), I’ve been biking about 12 miles every night this week.

For last night’s ride, I had it in mind to ride downtown to Town Lake and maybe join up with yjr Thursday Night Social Ride (TNSR),the weekly main event of Social Cycling Austin (SCA).  It’s a combination of anarchy / organized chaos, like a Critical Mass ride, and also in some ways it’s pretty relaxed if you just go with the flow.  I got a late start so figured I’d miss it.  I’m generally always happy to do my own ride, but wouldn’t you know it?  I crossed paths with the 300-strong group, so naturally I decided to join in the scary fun.

I use the term scary fun for several reasons.   Riders have and are consuming libations and herbs before, during and after the ride.  A bunch of 25-year old males are trying to impress either other.  Mix that together with different ability levels, and wrecks are bound to happen.  But it’s also fun because people deck out their bikes with lights, bring loud music players, the occasional dogs, crazy home-made high bikes, skaters, and some people wear costumes.  Keep Austin Weird, is not just a slogan, it’s a lifestyle, baby! 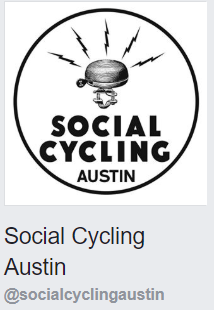 Fortunately I was astute and avoided crashes by riding at the rear, front or sides.  I heard there were a few and saw a few people coming off their bikes at a standstill or very slow speed, so no real injuries.  A few people passed too close for comfort to A Dude, but I held my ground.  There are actually some very good bike handlers in the group doing tricks, too.

It’s not all young people, either (which is fine if it is.)  But I saw some grey hairs in the bunch, and that’s nice that it’s multi-generational.  The ride starts with a hangout time,  has a long break at a park with more hanging out (and like the first time I went, fireworks!), and then ends at a bar.  I always skip that part.  But I enjoy chatting with folks at the stop and while riding, because it’s not usually too fast and with that many riders, it jams up at intersections.

One thing the TNSR does well is have ride leaders.  They are not all in the front, either.  But they will circulate amongst the pack and stop at key points to stop crossing car traffic, or when that is not possible or safe, to stop the riders until it is clear.  There are sweepers too, and the ride waits to regroup if some people get stuck behind a light.  So that’s really nice.  It’s also interesting to see people’s reactions as we ride by.  Mostly, it’s smiles and thumbs up, which is refreshing.  The odd person will be annoyed they have to stop in their car and wait a minute, but hey, people on bikes are going places and we’re traffic, too!

SCA’s slogan is “putting bikes on butts since 2009.”  And by the looks of it, they still do a very good job of getting people out to ride.  That’s about it, besides having fun; if there’s more to the group I’m not aware of it.  I spoke with several people for whom it was their first time.  Then there are clearly hard-core regulars, and the occasional drop-ins like me.  SCA also hosts other rides like Saturday late morning’s Caffeine Cruise and the Yoga Ride.  I think there’s one called Bike Curious, too.

I haven’t posted one of those short videos that are ride maps for a while, so here is my Relive video map for this ride.

After reaching the park, I hung out for a while.  It is a social ride, after all!  I talked with a computer programmer and skater my age bracket.  He had a lighted helmet that looked like the hats Devo used to wear.  Used the bathroom, filled up my water bottle, admired the fireworks, and chatted with some other folks.  I told a few of them about this blog, A couple even followed me on Strava, which is super nice of them!

Since it was near home but they were heading for the Hole in the Wall, a long-time punk rock bar, and I had more to do, I took my leave.  It was a good reminder that I needn’t always bike by myself, but I do have to make the effort to find other riders.  But TNSR was another fun bike ride in Austin, Texas.  More miles toward my goal of 4,000 for the year.  And a few more friends on bikes.  You can never have too many of those.

In fact, on tonight’s ride, I was behind two other riders and as I turned off I mentioned www.ADudeAbikes.com, and the guy said, “Hey, I know you!”  I didn’t catch his name so hopueflly he’ll say hello.  Austin is still a small town in some ways.  But to quote Steven Wright, the super droll and hilarious Boston comic I’ve loved his humor ever since I was introduced to it:  “It’s a small world.  But I wouldn’t want to paint it.”