For some time now, my left crank has not matched my right crank.  It was making me a little cranky!  So tonight I took a spin again to see my friends at the Austin Yellow Bike Project, www.AustinYellowBike.org.  The free shop has evening hours and is staffed by helpful volunteers called Coordinators.  Pete, Zack and Conti were there to offer pointers.  But it’s very much a Do It Yourself affair.  Come peek under the hood!

AYBP Is Fun, Free and Useful

When I arrived, there was a class from the Texas School for the Deaf.  AYBP often partners with schools to donate bikes and to teach students how to work on bicycles as well.  The kids of varying ages looked like that were having a good time, sometimes emphatically signing to each other.  Some folks were working on their own bikes, but many were volunteering with the Earn A Bike program.

To do this, you must volunteer for 24 hours, going through a checklist of skills like brakes, derailleurs, truing wheels, repacking hubs and more.  First you learn to fix bikes that will be donated, and then you can pick out your own bike and fix it up.  Then, you get to keep it!

It’s a cool way to get a bikeone that A Dude had started that but didn’t finish.  That’s because last year I won a Fairdale Weekender Archer in a raffle.  (Faithful readers may have noticed that I haven’t ridden it lately, but that’s a story for another day.)

Anyway, I signed in, was assigned a stand, and commenced sorting through piles of cranks to find a match.  I quickly realized I was not going to find one for the right side that attaches to the cassette.  But it also occurred to me that I could just match the left to the right, which is easier, or replace both.  However, I decided to hold off mostly because I liked having the left crank flare out a bit, and think I may be able to find one through another shop. 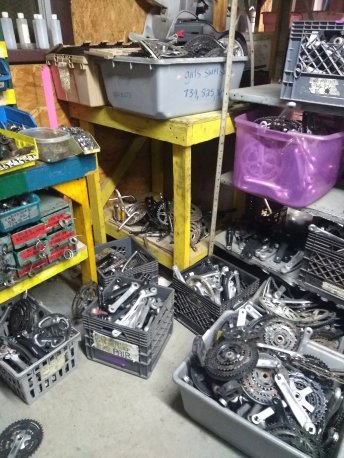 Sometimes You Gotta Roll With the Changes

Zach helped me with trying to figure out a good replacement crank, even though it didn’t work out.  Conti re-taught how to use the tensioning screws on my brakes, Pete suggested I re-position my rear reflector so it is visible under my recently-installed reflective slow-moving vehicle triangle (an innovation I came up with that I think is pretty smart and increases my visibility and likelihood of not dying rate dramatically!).

I think these guys (and the women who are there other nights) are great, because they are sharing their knowledge without pay, but also because they are really patient.  I’m sure they get asked the same things over and over.  But there’s no such thing as a stupid question. Another thing about AYPB is that it’s a worker-run collective — meaning, no bosses!  Of course that means a group meeting and a consensus decision making process, which sometimes can be long and frustrating.  It helps include all voices, though, so it’s worth it in my book.

Mostly I worked on oiling and cleaning my chain and the rest of my bike, which is always a good idea.  But it’s also smart to get out and interact with other folks in the cycling community.  Seeing a familiar face, meeting new people, and just being part of the scene and being seen are important when you mostly do solo riding.  Occasionally I’ll also let someone know about this blog if they seem like they might be interested.

I learn something new, have fun, and get in a bike ride, so what can be wrong with that?  Nada.  After cleaning up my station, I showed two other shop users, a father and daughter, where the broom closet was and that it was where the sink and the degreaser were kept.  I cleaned up my dirty hands, cycled home without incident, and lived to ride my bicicleta another day.  A little wiser, a little safer, and another 20-mile day in the books.  Yay bikes!  Yay bike people!  Yay Austin Yellow Bike Project!

PRIVACY NOTICE: This site, https://ADudeAbikes.WordPress.com, like all WordPress sites, uses cookies, so if you leave a comment it collects your email address, identifies your IP address, and it may collect other data unbeknownst to me. I am looking into how to comply with the European Union General Data Protection Regulation. In the meantime, if you do not wish to have any personal data collected, please go to www.ADudeAbikes.com. (That is currently just mirroring the WordPress site, so no data is collected there, according to the host.)

7 thoughts on “Toolin’ Around at Austin Yellow Bike Project”