Paul Simon and his band played the large concert Frank C. Erwin Jr. Center in Austin, Texas tonight.  I hesitate to even attempt to review the show, but I can certainly try to put in words the emotions his music evoked and other thoughts that come to mind.  Even that is hard, because he is such an important part of American music for over 60 years.  He’s a winner of countless awards, a Rock and Roll Hall of Fame inductee, 13-time Grammy winner, actor, had music featured in movies (notably The Graduate) and much more.  There are popular musicians who become famous, but some are at the next level, and he’s one of the greats for sure.

The Rhythm of the Saints

I first learned about Simon & (Art) Garfunkel from overhearing my parent’s folk music jam sessions.  My very first outdoor concert I attended was theirs, in the Dallas Cotton Bowl, on a rainy day in August of 1983 — 35 years ago.  Many of his songs continue to play on the radio and in the ears of people of a certain age who grew up hearing them.  And they endure because they’re good.  I saw their reunion tour in 2003 at the same venue.  It was a trip down memory lane, like tonight.

Then there was his amazing solo career.  I won tickets to see him in San Antonio at a somewhat smaller venue and got pretty close to the front row somehow.   So when I heard it was his farewell tour — he is 77 years old — I just had to splurge on a ticket and go.  His songs still feel fresh, and some were new to me.  But they also have layers of meaning and history to them.  I feel like they are imbedded in the DNA or soul of America, as well as my own.  How are you supposed to write about that?  Well, I’ll try.

All of These Spirit Voices

When I saw Paul (Mr. Simon seems too formal) play in the same auditorium 15 years ago, he brought out the Everly Brothers, who were big hits in the 50’s and 60’s.  And throughout his music, you can hear the evolution of his music and lyrics but also that he covered many different genres.  He was instrumental (pun intended) in popularizing African and Brazilian music by incorporating it into his own stylings with Graceland and Rhythym of the Saints. 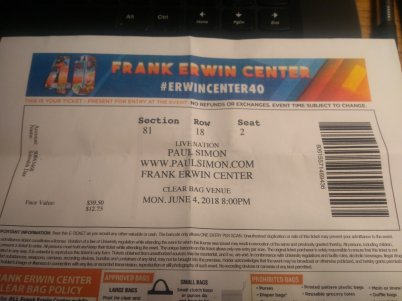 His early rock music days included recording with Garfunkel as Tom & Jerry (a name chosen to minimize his Jewish ancestry).  He said tonight that “Rock music became stupid,” and as opposed to Bob Dylan who went from acoustic to electric, he was went the opposite way.  The folk songs that made him world famous endure to this day, but so do many of his other songs.

There are too many to name, and he played some of his hits, but many songs that weren’t familiar, but still hauntingly, achingly, poetically beautiful.  Another thing he said was that “most of these songs were meant to be danced to,” and a number of concertgoers obliged.  Unfortunately the show was not sold out, but those who attended were treated to a rich tapestry of songs.   My friend kept track of the songs and made the set list, so get ready to hum:

America*
50 Ways to Leave Your Lover
The Boy in the Bubble
Dazzling Blue
That Was Your Mother
Rewrite
Mother and Child Reunion
Me and Julio Down by the Schoolyard
Rene and Georgette Magritte With Their Dog After the War
Can’t Run But
Wristband
Spirit Voices
The Obvious Child
Questions for the Angels
The Cool, Cool River
Diamonds on the Soles of Her Shoes
You Can Call Me Al
Homeward Bound*
Kodachrome
Still Crazy After All These Years
Graceland
The Boxer*
Late in the Evening
American Tune
The Sound of Silence*

Music and the Persistence of Memory

Music is many things to many people.  A way to escape.  Have fun.  Something to dance to or to work by.  You may learn to play it yourself.  Singing in the shower.  It can be sacred, profane, popular, thematic, iconic.  Think of movies without a soundtrack:  impossible (even the old silent movies had them).  Weddings, graduations, funerals, parties, sporting events, and almost every other sort of human gathering imaginable.  And in many cases, songs and artists can become imbedded in our minds and bodies like the food we eat and the air we breathe.

At some point I stopped buying CD’s and my stereo didn’t work.  I never got onto I-Tunes, and now just listen to the radio, mostly classical, but also whatever, but moreseo Pandora.  Which keeps me from hearing alot of new music, but I heard alot at SXSW.  Last year I saw The Who in their final tour.  So I am ok with the classics.  I suppose if you aren’t familiar with Simon’s work or live overseas in a place where he wasn’t played much, reading about it won’t mean very much to you.  But after the show I talked to a guy nearby.  He had seen the show in Dallas, and loved it so much, he drove to Austin.  I correctly identified his country of origin by his accent and appearance as Iran.  He knew of him back then.  Touching on another point about music, and Paul Simon:  music is universal.

Simon is not without controversy, because some believe he had violated the spirit of the cultural boycott of South Africa during apartheid by going there to meet with musicians, and then recording them in the US.  But he didn’t perform in Sun City, like Queen and others.  His split up with Garfunkel at the height of their success seemed odd.  He was married several times before sticking with Edie Brickell, the North Texas singer of the New Bohemians who had a hit song with “What I Am” and who is 25 years his junior.  In 2014, they got into a little trouble for having a mild altercation.  But to dismiss the art of one’s heroes, musical or otherwise because they are human is hypocritical.  Whom among us is perfect?  He’s certainly no Harvey Weinstein, as far as I know.

In the end, we are left with the artist’s art.  Tonight, with his vocal range well intact, guitar playing masterful, and at times dancing around the stage and his witty banter and general showmanship, I felt transported.  To the time I first saw him play.  To the hilarious music video of “You Can Call Me Al” with Chevy Chase lip-sycnching the words.  To being blown away by the new sounds on every album, a turn of phrase, or just damn good music.  He’s not fully retiring, because he’ll probably still play, just not do long tours.  He’s sure earned that right at 77.  He has a new album coming out.  And a biography called simply, Paul Simon:  The Life, by Robert Hillburn.

If you know his work, you know what I mean.  If you don’t, you probably don’t have access to a radio with any Western music on it and are living in a dark cave.  But if you’re reading this blog, you can go to www.PaulSimon.com and find out or rediscover the magic.  There Goes Rhymin’ Simon indeed.  Thank you Paul, for your stories, your poetry, your songs, your music.   You’ve never been a One Trick Pony.  But ride off into your retirement, and enjoy your legacy.  We who hear it sure will, hopefully for a long time.  And lest you think this blog doesn’t have anything to do with bicycles, below is a lyric for you.

In my little town
I grew up believing
God keeps his eye on us all
And He used to lean upon me
As I pledged allegiance to the wall
Lord, I recall
My little town
Coming home after school
Flying my bike past the gates
Of the factories
My mom doing the laundry
Hanging our shirts
In the dirty breeze

-My Little Town by Paul Simon

PRIVACY NOTICE: This site, https://ADudeAbikes.WordPress.com, like all WordPress sites, uses cookies, so if you leave a comment it collects your email address, identifies your IP address, and it may collect other data unbeknownst to me. WordPress appears to be complying with the European Union General Data Protection Regulation. I personally don’t do anything with your information, although if you have commented, your email is shown, and I may in the future add your email to a list that you can opt out of. If you do not wish to have any personal data collected, please go to http://www.ADudeAbikes.com. (That is currently just mirroring the WordPress site, so no data is collected there, according to the host.)