After a few weeks in the country, today it was time to head back to the city.  I’m still unpacking and will be for some time, but I really enjoyed the experience of living in a cabin in the woods with peace, quiet and a dog named Buddy.  It was generally a great time and no coyotes or bobcats ate us, so that was great.  While the reason for being there was not great at all, I’m grateful for the opportunity to be able to have the time to write this blog and interacting with other bloggers.  Thanks to everyone who has been liking, commenting and following, but more importantly, actually reading what I write.

Living a little closer to the land makes one have perspective.  When the heat is not automatically on, there’s a mouse in the house, and coyotes seem like they are right outside the window, priorities become more in focus.  I had most of the conveniences of home so it’s not like I was living in a yurt without electricity, heat or sewer services.  But when the hot water from the well smells like rotten eggs, it makes you really grateful for city water that you might otherwise complain about.  And when the road changes from pavement to dirt and dirt to mud in the rain, you don’t take concrete for granted so much.

Realizations like that seem simple and obvious to read, especially if you’re one of the global majority who live in struggle and without conveniences every day.  But when you’ve been a city person for a long time it’s easy to lose perspective.  One of the downsides of not having a car is not being able to get out of town to go camping.  Someday maybe I can do bike packing, but that’s another thing.

Also, having a car is convenient but weird.  That’s because it makes it really easy to not ride a bike.  That’s something to consider if you do have a car.  If you have cookies in the pantry, it’s alot easier to eat it.  Of course if you need a car to get around because you’re out in the country, you have to get creative.  Take your bike on the car and park it then ride part way to work.  Or take it all the way to work and ride to the train and then home.  Multi-modal options do exist in some cases if you get creative and you’re committed to biking.  As an unemployed bum and aspiring writeeeks I took a vacation.  You can read my post 13 Years (Not) a Slave to Cars.

It was great fun and a fair amount of work or shall I say responsibility having a canine buddy named Buddy to hang out with.  I could probably write a whole pr I didn’t have to go to town much and when I did I wimped out and drove, so for three wost about that and maybe I will.

Starting tomorrow, I’m volunteering at a huge convention you may have heard about called South by Southwest.  I still hope to blog but for the next four days they will probably be abbreviated, which is probably a good thing.  I biked downtown to the training and back, but came up short of my 50-miles per week mileage goal by 8.6.  That’s OK, because I’m pretty sure I’ll do more than that over the next two weeks.  It’s all about the averages and keeping moving an hour a day.  I’ll scale back to one 30 minute walk but keeping up one a day is good as well as the daily yoga.

I’m now living in sort of a one-room cabin in the city.  More technically called a zendo, I call it a casita.  Until I get all moved in it won’t really feel like home and I have a lot of junk to sort through and donate, sell, recycle or trash.  But for now it’s nice to have my own place again where I can have more privacy and do my own thing without a housemate to worry about.  Not too shabby.  But pretty soon I’m going to have to start raising funds for the Keep A Dude Abikes Off The Streets Foundation.

The Oscars were on tonight and since A Dude enjoys films, it’s always enjoyable to watch and hear while doing other things.  I was watching them on a recording but it stopped before it was over.  So don’t spoil it for me and hopefully I can catch the rest of it later.  Maybe I’ll start reviewing films next.  Why not?

*see the About page for my email 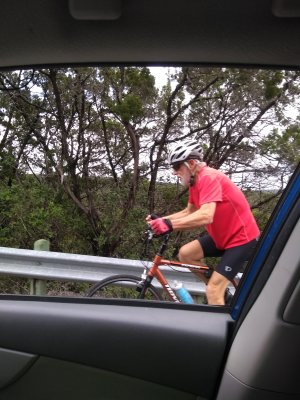 2 thoughts on “Last Day in the Holler”