It Will All Become Clear as Mud

Today’s blog is coming from my tired brain, but the title will make sense by the end.  It’s been a week or more since I began feeling bad due to cedar fever, or so I thought.  Austin definitely had a few days of very high pollen counts.  But when I continued to feeling bad after that went down, I wondered.  Still I’m having a dry, mostly unproductive cough.  This is the US, so unproductive is bad.  Because the US is all about capitalism, and if you’re not producing anything, you’re worthless, right?  Referencing the Dire Straits song from a few days ago, maybe I have “Industrial Disease”?  Let’s hope not and I’m back on the bicycle soon.

— “Industrial Disease” from Love Over Gold by Dire Straits

There’s the fatigue, more than usual, sometimes requiring a nap, or two or three.  Headache, dizziness, unclear thinking, and just generally not feeling like A Dude.  And not feeling great I’ve eaten less so am down more pounds than expected.  So something is off, I just don’t know what yet.  This post’s title may seem like more evidence that A Dude has truly slipped his chain off his cassette, but not yet.

Could it be supplements?  The effects of daily walking?  A lot less biking?  More challenging yoga videos than I’m used to?  I don’t know.  So I took myself to the walk-in community clinic this afternoon.  But of course all the slots had been taken hours earlier, so I was shut out.  Acupuncture was full.  Health coach not available.  The only help I got was from a pharmacist who suggested an allergy spray, which I tried.  Too soon to tell, it takes a few days.  I limped home via the library.  At least some knowledge is still free.

Warren Beatty Had It Right 20 Years Ago

The problem with health care in America is that it’s health insurance first.  And that’s business before people.  Today was probably my last day to sign up for Affordable Care Act since becoming unemployed, but there was no way I could afford it.  Even if it would have been essentially tied to my unemployment, the deductible was so high I’d be paying full price for most of the year before I saw any benefits.  Thus, I’m forced to wait for two

months just to see a doctor unless I walk-in, and that’s a several hour wait while you don’t feel good.  How have other countries figured this out and we haven’t?  Corporate, capitalist, cruel greed, plain and simple, that’s how.

A lesser-known but favorite movie of mine from 1998 is called Bulworth.  I disdain information that ruins a movie and also the words describing said infraction, but it won’t be giving much away to say that the health insurance lobby figures heavily into the story.  It was rather prescient in the way it brought up health care issues we’re still dealing with today.

(I also really liked Denzel Washington’s John Q which came out four years later but was much more serious.)  Bulworth stars director Warren Beatty as a US senator and Halle Barry as his unbelievable paramour (because of the age difference).  Through an odd series of events, he finds himself saying whatever comes to mind.  Here’s a quote:

“Sen. Jay Billington Bulworth: Yo, everybody gonna get sick someday / But nobody knows how they gonna pay / Health care, managed care, HMOs / Ain’t gonna work, no sir, not those / ‘Cause the thing that’s the same in every one of these / Is these motherfuckers there, the insurance companies!

Sen. Jay Billington Bulworth: Yeah, yeah / You can call it single-payer or Canadian way / Only socialized medicine will ever save the day! Come on now, lemme hear that dirty word – SOCIALISM!”

Presidents Obama and Clinton both torpedoed national insurance backed by Representative Dennis Kuchinich; Senator Bernie Sanders has championed it more lately through expansion of Medicaid.  But we’re no closer to government-sponsored health care than we are to peace in the Middle East, with Iran or North Korea than we were 20 years ago.  That doesn’t mean it wouldn’t work; while imperfect, it seems to serve more people in other countries than the US system does.  And that sucks balls.  I’m certainly feeling the brunt of the effects by losing my employer-provided coverage.

What About The X-Files, Dude?

Well, if you’re living under a rock or are too good for television, you probably know that the awesome  show about two FBI agents investigating paranormal events, The X-Files, starring David Duchovny and Gillian Anderson, has been rebooted.  The latest episode, “The Lost Art of Forehead Sweat,” was hilarious like Bulworth but also had a serious message about perception, memory, mind control, and yes, aliens (those pesky Martians, in this case).  According to IMDB, it “explores the idea of The Mandela Effect, in which large groups of people remember an alternate history.”

Remember when a small group of lunatic fringe people (whose own nickname came unbeknownst to them from a sexual act) were so happy that Obamacare was going away because they had the Affordable Care Act?   It’s the same thing, ignorami!  Speaking of the FBI and despite it’s heavy-handed approach, it is supposed to be independent of politics.  Don’t even get me started on the forced resignation of FBI Deputy Director Andrew McCabe by Not-My-President Tinyhands Orangehead.  It’s J. Edgar Hoover all over again, no hush-hush about the dress or heels needed because it’s bald-faced lies and manipulation.

Well, this was supposed to be a short post, and it hasn’t been.  I’ll get to the point.  What is happening to the US due to the President and his cronies is so absurd it’s believable.  My other point is that sometimes bicycling, walking, yoga-cizing, dieting may not be enough to keep A Dude healthy.  Let’s hope the holey safety net catches me.  And that the majority of the good people of this country come to their senses and stop believing the REAL fake news — that the people in charge have our best interests at heart — and instead will “speak truth to power” (as the Quakers aka Religious Society of Friends say).  That is the best, nonviolent way to get our country back to the people, and eventually real and good health care, jobs, housing, education, food and more for all. 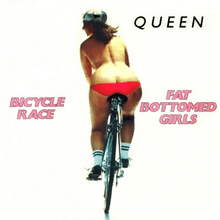 Now, while A Dude is taking it easy, go do what Queen and Freddy Mercury exhorted us to do, “Get on your bikes and ride!”