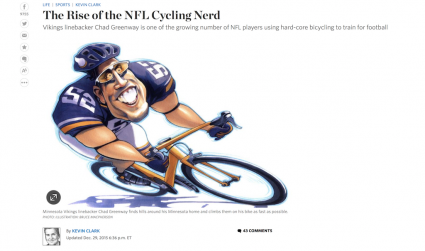 10 Commonalities Between Football and Bicycling

A Dude Abikes is not a huge football fan since the days when he parked cars for the Dallas Cowboys as a Boy Scout.  He’d get in after the first quarter to watch “America’s Team,” but then they started doing drugs and he lost interest.  But it’s a sport, so I appreciate everyone’s efforts.  So when Holly O, a bad ass cyclist friend who is not on Strava whom I met on the “Don’t Fear The Finger” Prostate Cancer One-Day Ride in August of 2016 invited me south of downtown to watch the Super Bowl, I said sure, why not?

More than a few comparisons can be made between football and bicycling: END_OF_DOCUMENT_TOKEN_TO_BE_REPLACED