Today was a somber occasion, the ride to remember Anthony John Diaz, run over by a bus on January 28th.  I’ve been on a few of these now and it both causes me literal grief, not to mention that another senseless, needless, horrible death of a person on a bike who was doing the right thing simply pisses me off.  For some reason, a city bus driver ran over and killed a person riding a bicycle.  We don’t know yet if she was overworked, high on drugs or booze, hated cyclists, or what.  The place it happened is one I ride a lot and was due to be fixed years ago, but wasn’t.

Pray for the dead and fight like hell for the living.

It didn’t help that on the way a university police officer was blocking the bike lane; I calmly let him know about it as I passed his open window. As other cars, also in the lane, turned right, he pulled up to me and another bike rider and claimed he was on his way to a 9-1-1 call.  This was a lie, because he stopped at the light around the corner and didn’t put on his sirens.  Also, ossifer, having a badge is no excuse to block a bike lane, which he knew full well is illegal.  No one is above the law.  Not you, not I, not Donald Fucking Trump.  (Sorry Republican readers, you’re on the wrong side of history.  You can and should change sides right away.)  Digression/rant over.  The point is that the callous attitude of car drivers like that cop is why Anthony John Diaz was killed.  And that’s a crying shame.

My new disc brake pads came in at Sun & Ski Sports, so Sophie and I rode over and took care of that.  After 4,000 miles, she was ready for them.  It cost a pretty penny even after using the rest of a holiday gift card from dear mom.  She gave me life and is helping to save it with a very bright rear light and now the brake repair.  I took Mike in the Bike Shop and new guy Byron, refugee from the nearly and recently demised Performance Bicycles some Austin Beer Works Hoppy Pale Ale.  Tip beer, they call it.  It’s to smooth the social relationship between cyclist and mechanic, it’s recommended to occasionally ply one’s wrencher with adult beverages.  After all, a happy mechanic is a good mechanic.  Anyway, I took care of that so I could be safe and go on this ride and not run into anyone.  I hoofed it downtown and then to East Austin, for about 12 miles total.

The ride was organized by Social Cycling Austin.  Best known for wacky group rides like Thursday Night Social Ride,  Yoga Ride and Caffeine Cruise, there were several homemade high-rise bikes, which seem deadly to get on and off, but they managed.  There were about 40 bikers total, some in kits, coming from work, to the more colorfully dressed Keep It Weird Austin people.  No one said much, and there weren’t any speeches.  There were TV station cameras, though.  I recognized one person, a classmate from my League Cycling Instructor class, and we chatted.

We rolled out at a slow pace, taking the lane, and drawing stares of interest from pedestrians and looks of impatience from car drivers.  No one talked unless necessary to avoid hazards or for stopping at lights.  Pre-determined guides would stop at key points to help keep the ride together.  I don’t know what was going through the minds of the other people, but I tried to focus on Anthony.  Even though I didn’t know him, I somehow felt close to him by showing up and being there.  In Latin America there is the word PRESENTE! used to remember the dead, often at a protest.

I had that sense of things as we wound our way back north to the University of Texas, to the scene of the crime.  Not that Anthony’s ghost was floating along next to us, just that he was in the thoughts of our rolling protest, and that felt like a powerful thing.  As we approached, I found myself getting emotional.  My silent meditative moments augmented by the oblivious officer along with all the close calls and road rage that was stored up in my muscles seem to want to come out through water from my eyes and a cry from my throat.  I kept it together somehow, and kept peadling.  “It could have been me,” I thought again.

Approaching the edge of campus there were UT cops on bikes and two in cars, waiting for us.  I was a little unnerved due to my prior interaction and the police not having a great history of being on the side of bicyclists.  But one car went ahead to escort us, and the bike cops brought up the rear.  Arriving outside the behemoth stadium where the UT Longhorns play, we pulled off the narrow road to a very wide sidewalk.  I noticed that it could be reconfigured and the road would be much safer.

Chained to a pole adjacent to the spot where Anthony was run down by a 40,000-pound death ram, his dreams — like his body, crushed, his life extinguished — was a bicycle.  It was painted white, with plastic flowers on it, and a laminated piece of paper with his name on it.  We gathered around, still mostly silent.  The leader of the ride got a bullhorn with a speaker and talked for a moment.  He made a short speech about how it was a bad and wrong thing, and he hoped things would change.  No one else accepted his offer to talk.  I thought about it but quickly remembered I was feeling too emotional to do so.  So we stood there for a while.

Media cameras took pictures, as did I.  I noticed a few familiar faces, but didn’t go talk to anyone except one person, who wasn’t who I thought he was.  The organizer talked to the police, who would lead us out, and said it was time to go.   The ride would proceed back to East Austin to the headquarters of the bus company, Capital Metro.  As I was debating whether to continue or not, I saw a member of the Bike Austin board of directors.  I had just been at a meeting with him Monday, where I heard about this ride. 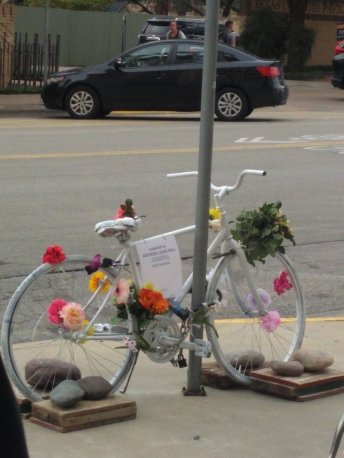 The Struggle for Safer Streets Continues

We were approached by a young woman who asked if we had been on the ride.  I said I had, and she asked to record me answering some questions for the school newspaper.  I talked about bieng a member of Bike Austin, how I rode that street often, and realized it could have been me.  I wanted the University to follow its old plans to fix the road, maybe even remove all the parking, and for all the stakeholders to sit down and figure it out.  I don’t know if she will use my quote, but at least I got to say my piece to a reporter.

By then the ride was gone, and I contemplated chasing after it.  But my knee was hurting, my brain was tired, and my heart was heavy.  It still is.  People die every day.  Millions.  And not that many on bikes.  But this one hit close to home for me, for anyone who rides a bike, or knew Anthony.  What happens next with the investigation, possible punishment of the driver, or protests if she gets a slap on the wrist or wasn’t at fault?  Who knows?

We, as people, cyclists, pedestrians, car drivers and more, all need to fight for better and safer streets.  Today it both mattered, and it didn’t.  Because remembering a life taken to soon is important by itself.  But when carrying that fight forward, we do it for a fallen comrade, we are honoring his memory, and that of those who came and perished too soon before him.  Andrew Tilin, Leonel Hernandez, Minh-Tam Phan, to name a few I’ve written about before.

To this list we are very sad to add the name of Anthony John Diaz.  But add it, we must.  And fight on, we shall.  Until either it is our turn to join him, or cars and buses learn to respect and peacefully coexist with bicycles.  To you all, A Dude says, “Anthony John Diaz:  ¡Presente!” 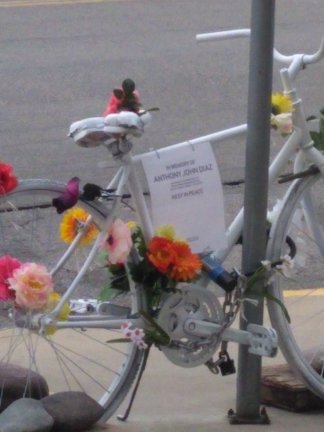 Thank you for visiting me on WordPress or www.ADudeAbikes.com.  Feel free to add your Likes and Comments and to Follow the blog through WordPress if you have it, or by email.  Contact me on the About page with any questions.  Please feel free to Re-blog and Share as long as you give credit and the permalink to this post.

7 thoughts on “Ride of Silence to Ghost Bike for Anthony John Diaz: ¡Presente!”